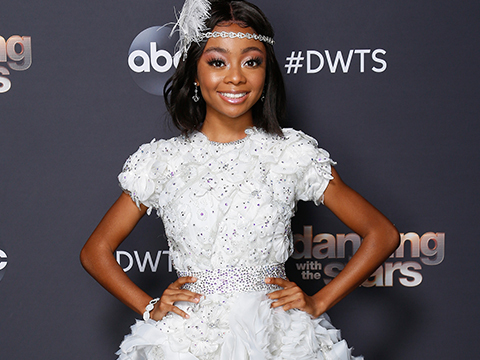 Skai Jackson on DWTS and Being a Twitter Meme

Whenever Skai Jackson is involved in something, you know you're in for a good time! Whether we're chilling with her on the sets of her TV shows "Bunk'd" and "Jessie" or challenging her to a game of "Chubby Bunny" in the Young Hollywood Studio, it's never a dull moment with the young star! So it's no surprise to anyone that the actress's stint on the 29th season of "Dancing With The Stars" has been quite memorable, to put it lightly! We catch up with Skai via Zoom to find out more about her experience on the hit ABC series and what some of her favorite performance outfits have been so far! She also shares her thoughts on being a favorite social media meme, and her appearance on DWTS has certainly inspired some hilarious new ones, like the time she accidentally pulled her partner Alan Bersten's hair during a performance! She also reveals what's going through her mind before she hits the dance floor, and more!