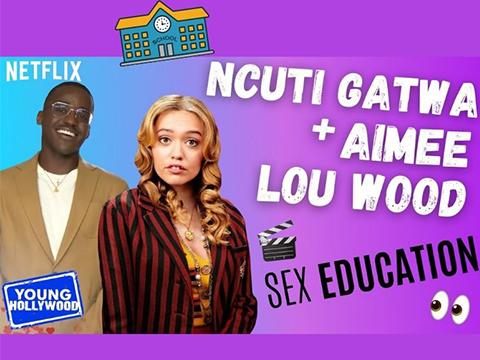 Netflix's hilarious and raunchy teen comedy series "Sex Education" is now in its third season and only seems to be getting better and better! The show features a whole host of unique and intriguing characters, each with their own set of struggles and quirks, including Eric, the main character Otis's gay bff who comes from a religious African family, and Aimee, the popular girl with a secret friendship with one of the not-so popular girls at school. Young Hollywood catches up with Eric and Aimee themselves, Ncuti Gatwa and Aimee Lou Wood, over Zoom to talk more about Season 3 and their overall experience working on this rule-breaking show, including how it has not only impacted other real-life teens but themselves as well and why introducing new characters to the show every season is important. Plus, Ncuti and Aimee both reveal the one character from the series that is their absolute favorite!