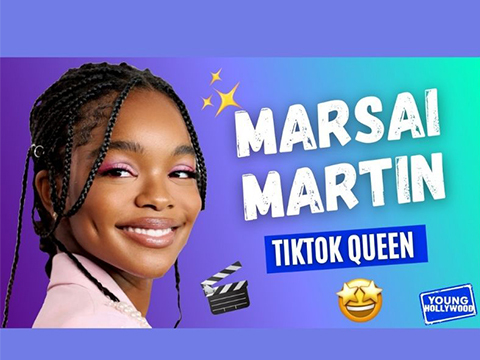 Ever since Marsai Martin broke out with her role on ABC's "Black-ish" at the age of ten, she hasn't stopped blowing up since, either in film and television or social media! Lately, she has been getting into the voice over game, and her latest project in that arena is the Peacock animated series "Dragons Rescue Riders: Heroes of the Sky", which is a part of the mega-popular 'How To Train Your Dragon' franchise! Young Hollywood catches up with Marsai over Zoom to find out more about this series and her dragon character, Aggro, including how she relates to her dragon avatar and whether or not she likes hearing the sound of her own voice on-screen! She also discusses with us her insanely popular viral TikTok, plus we play a game of "This or That" to find out what she prefers, like texts versus Facetime, memes of herself or someone else, "Black-ish" versus "Dragons Rescue Riders", and more! Catch all 6 episodes of "Dragons Rescue Riders: Heroes of the Sky" streaming on Peacock now!