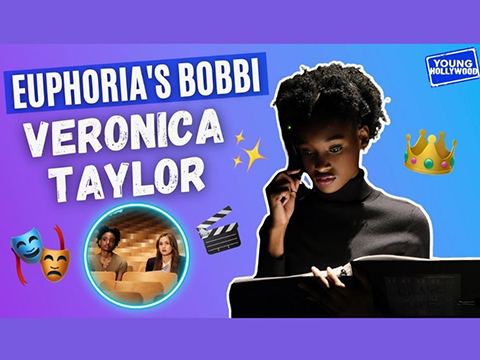 Anyone who has ever participated in a high school drama production knows that the real boss on site is the stage manager, and anyone who knows Lexi Howard has to assume that she would only choose the best person with which to entrust such a responsibility for her play 'Our Life'. Enter Bobbi, a new character introduced in Season 2 of HBO's hit drama series "Euphoria" as the stage manager/friend/right-hand woman of Maude Apatow's character, and the young lady tasked with bringing Bobbi to life is the super charismatic newcomers Veronica S. Taylor! Young Hollywood catches up with Veronica via Zoom to chat about her incredible experience being part of the mega-popular show and how her character in particular has blown up online. She shares with us juicy deets about filming the play scene, including the now-epic "Hero Dance", plus we ask her whether or not the rumors are true -- was Tom Holland in the audience?!