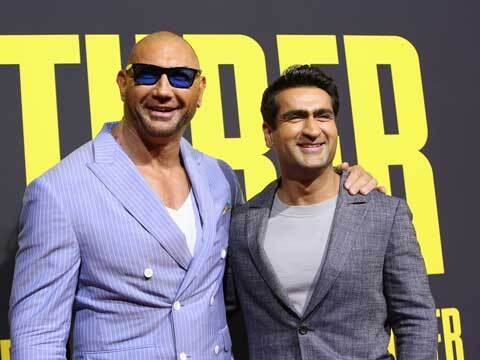 What do you get when you pair Dave Bautista with Kumail Nanjiani, and add a dog for good measure? Hilarity, that's what! As the pro wrestler known as Batista, Dave has built a career on his intensity, but with roles like Drax in the 'Guardians of the Galaxy' movies, we got to see his more humorous side, which is put on full display in the buddy comedy 'Stuber' -- with the help of his co-star, comedian and Oscar-nominated writer Kumail! We catch up with the unlikely duo at SXSW in Austin where they are premiering the film to get the scoop on the wacky premise and what essentials they needed to get through spending a lot of time in a car together throughout filming! They also share their own real-life stories about odd Uber experiences, plus they reveal their favorite (spoiler-free) moments in the film, and Dave explains why LASIK surgery is not a good idea for someone in his line of work!