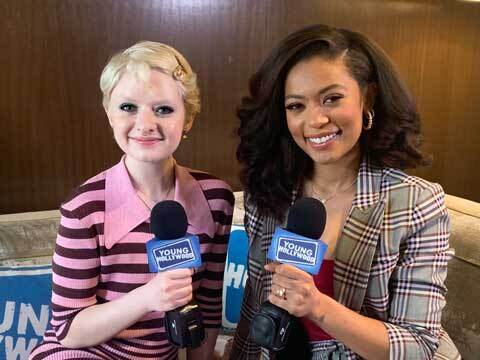 Chilling Adventures of Sabrina Stars Interview Each other

Witches and warlocks and everything in-between, this one is for you! Netflix's spooky comic book adaptation "Chilling Adventures of Sabrina" enters its second season (or "Part 3", as Netflix refers to it) and things are getting more and more devilish in the Riverdale-adjacent town of Greendale, where everyday is Halloween! Young Hollywood sits down with two are Sabrina's BFFs, Jaz Sinclair (who plays the clairvoyant Roz) and Lachlan Watson (who plays Theo, who is able to communicate with her dead ancestors) to get all the behind-the-scenes scoop on this outrageous series! Find out who is the biggest prankster on set and which one of them is most likely to break into laughter during a serious scene, plus the reveal a hilarious moment on set involving the Disney musical 'Mulan' and what other Netflix show they'd love to do a crossover episode with!