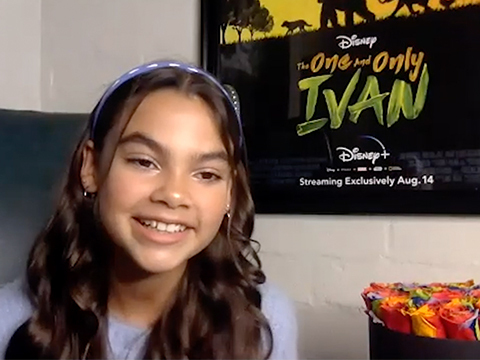 Even if you may not be familiar with the name Ariana Greenblatt, you definitely know her face -- especially when it's covered in green makeup! Ariana entered mainstream consciousness when she appeared in 'Avengers: Infinity War' as the younger version of Zoe Saldana's character, Gamora. After managing to tug at even Thanos's heartstrings, Ariana now finds herself front and center of another Disney property, the new Disney+ original film 'The One and Only Ivan'! Young Hollywood catches up with the rising young actress via Zoom to find out more about this much-anticipated project and how all the intense special effects from 'Infinity War' prepared her for the vfx in this film! She also tells us her reaction to learning she booked the part (plus the added bonus of filming in London), plus she gives us some of her makeup faves and plays a game of "Most Used"! 'The One and Only Ivan' is now streaming on Disney+!