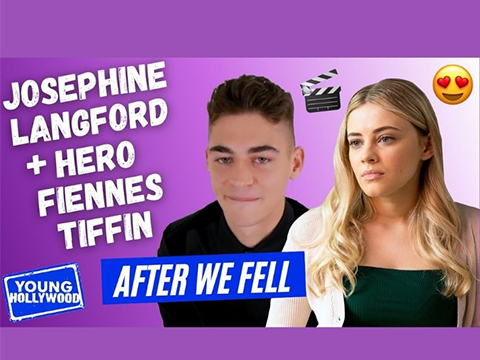 After we fell in love with the angsty, drama-filled romance between Tessa and Hardin in 2019's 'After' (based on Anna Todd's hit book series), we knew we needed more! Now on the third movie, 'After We Fell', Tessa and Hardin's relationship is as tumultuous as ever and we are obsessed! Young Hollywood catches up with Hardin & Tessa themselves, Hero Fiennes Tiffin and Josephine Langford, over Zoom to to find out more about their experiences filming this movie series and their complicated on-screen relationship, including whether or not Hero would be friends with Hardin IRL and why Josephine didn't watch the previous 2 movies before filming the third. We also play a game of "Who's Most Likely To" to see who between the actor or their character are more likely to give better advice, spend more money, reply to texts faster, and more. Plus, Hero reveals what he thinks Hardin's Insta bio would be, and Josephine reveals the awkward reality of filming those dancing scenes!