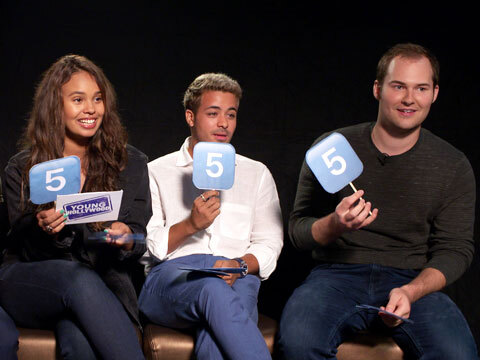 In the third season of Netflix's controversial drama series "13 Reasons Why", the focus shifts from "Why Did Hannah Baker Kill Herself?" and turns toward an all-new mystery: "Who Killed Bryce Walker?" That's right, the de facto villian of the first 2 seasons finally got what's coming to him, but who did the deed? Young Hollywood sits down with the stars of the series, including Bryce himself, Justin Prentice, along with Alisha Boe (Jessica), Timothy Granaderos (Monty), and Christian Navarro (Tony), to throw out some fan theories circulating online and hear their opinions on them in a game of "Rate and Debate"! Put your tinfoil hats on and find out how the actors rate fans' speculations about who the culprit could be -- Was it Clay? Or Tyler? Arya Stark? Or was it a group effort?