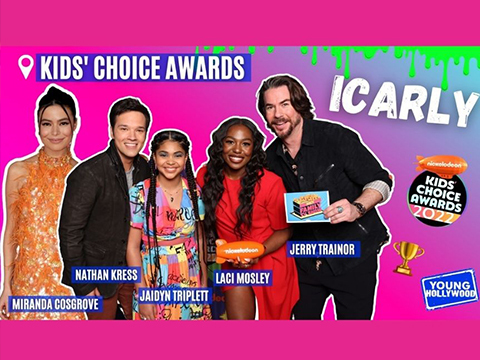 The orange carpet is open for business! Young Hollywood heads to the Kids' Choice Awards where another iconic Nickelodeon show is making their return to the orange carpet as well! The Paramount+ reboot of "iCarly" has been a bona fide hit with fans, who let them know it with 4 KCA nominations, including Favorite Family TV Show and Favorite Female TV Star for KCAs co-host Miranda Cosgrove! Also vying for Favorite Male TV Star were "iCarly" faves Nathan Kress and Jerry Trainor, both of whom we catch up with to get their thoughts on being nominated and returning to their Nick roots after so many years! We also chat with "iCarly" newbies Laci Mosley and Jaidyn Triplett to hear about their experience joining this now-classic franchise! Find out who everyone is looking forward to seeing at the show PLUS the one previously unseen character the actors would like to see make an appearance in the reboot!