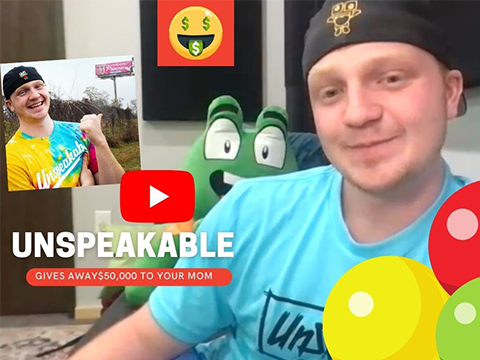 If you have small children -- or were recently one yourself -- you definitely know the name Unspeakable, AKA Nathan Graham! The YouTuber gained popularity in the early-2010s for his Minecraft gameplay videos which became a hit with little kids, and his success, along with a thriving merchandise biz, has made him one of the most successful and profitable YouTubers out there! Now, Nathan is giving back, and to the ones who mean the most -- Moms! In celebration of Mother's Day this year, Nathan is giving away $50,000 to some lucky moms in his local Houston area! He joins Young Hollywood via Zoom to tell us more about this initiative, including where the idea came from and how some moms didn't believe it was real! He also tells us what he does in his down time (meaning, off-camera) and why he has no plans to ever move to L.A., plus he teases what he has in store of Father's Day!