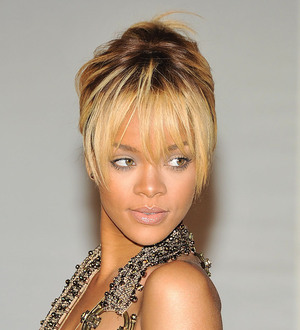 Rihanna was the one who came up with the idea to include Chris Brown on her X-rated track Birthday Cake, according to producer The-Dream.

The Umbrella singer risked a backlash by collaborating with her abusive ex-boyfriend on the controversial single, which she debuted online on her 24th birthday on Monday (20Feb12).

The sexually-charged duet has been criticised by fans and critics alike but The-Dream, who wrote the song, insists Rihanna knew exactly what response she would provoke by inviting Brown to contribute vocals.

"She's pretty smart too. The same questions that went through my mind, and I'm an artist also, had to have gone through hers. When she raised the question to me, I know she's not crazy. So my thought was you've been thinking about this, you've already thought it out, so evidently you know what reaction you (sic) gonna get."

The-Dream also praises Rihanna for forgiving Brown, who left her bloodied and bruised after their 2009 bust-up, and encourages music fans to do the same.

He adds, "Don't say you know how to forgive when you don't. Everybody knows what took place, cool. Have the power to really forgive if that's what it is, if not stay on that side of the fence from the beginning. It's easy to kinda throw Chris under the bus all the time, but c'mon, man. OK, we get it."

Brown landed a criminal conviction, was sentenced to probation and ordered to stay away from Rihanna after the brutal altercation.

Biggest Reveals & Trailer Drops From Comic-Con '22!
Why “RuPaul’s Drag Race All Stars, All Winners” Is the Best All-Stars Season Yet!

Why “RuPaul’s Drag Race All Stars, All Winners” Is the Best All-Stars Season Yet!
ARTIST TO WATCH: Kallie Rock