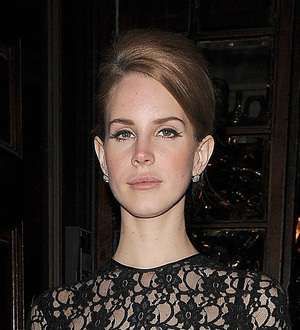 Singing sensation Lana Del Rey wowed the fashion crowd with a serenading session at a private dinner on Sunday night (19Feb12) for Mulberry, the fashion house which has designed a bag in her honor.

The Video Games star has already proved a hit with the style elite after landing a modeling contract and inspiring designers at the British fashion house to create a must-have purse, the Del Rey.

And as fashion's most popular pop star, she donned her designer gear to sing several tracks for 80 fashion insiders, including actresses Michelle Williams and Elizabeth Olsen, and Vogue editor-in-chief Anna Wintour, as part of London Fashion Week.