Yahoo!'s 1st Trailer for "Community" Season 6 Reminds Us Why We're Glad the Show Was Saved! 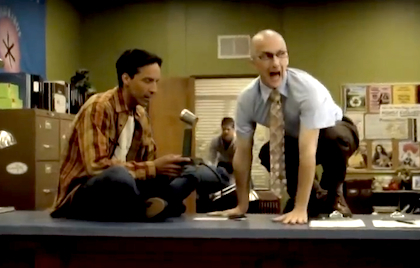 Good morning, Greendale! The search engine website Yahoo!, also known for fantasy sports, email, and a bunch of other things I personally don’t understand, is branching out further into television production. Their first venture is the resurrection of the recently cancelled NBC show with a vast cult following, “Community”, about a whacky community college called Greendale where the staff and students get involved in completely surreal situations. The show created lots of inside jokes with fans, their most popular one being how they want to make six seasons and a movie. For five seasons, “Community” was constantly on the edge of being cancelled during its entire run. A few months ago, NBC finally gave the show the axe, just short of their six season goal, and fans thought it was all over. Fans rejoiced just in time for Comic-Con when Yahoo! swooped in to save Greendale!

The first teaser trailer for the new season of “Community” has been released, and it gives away spoilers like you wouldn’t believe! Nothing but new material and all the funniest jokes are on display, leaving absolutely nothing to the imagination!

Well, okay, it’s a collage of clips from all the past seasons, but it’s so well put together that any fan of “Community” will be happy to see it. It looks like the show is in good hands with Yahoo!

There you have it, "Community" fans, Greendale is saved for real this time. Hopefully Yahoo! is looking to get into movie development as well, but a final season is a great start for the end of this show. Filming for the sixth season of “Community” is set to begin this Fall, which is crazy close, so enjoy this teaser until then.

You can also flashback to YH's visit to the set of the show:

Did this teaser trailer get you excited for the new season?