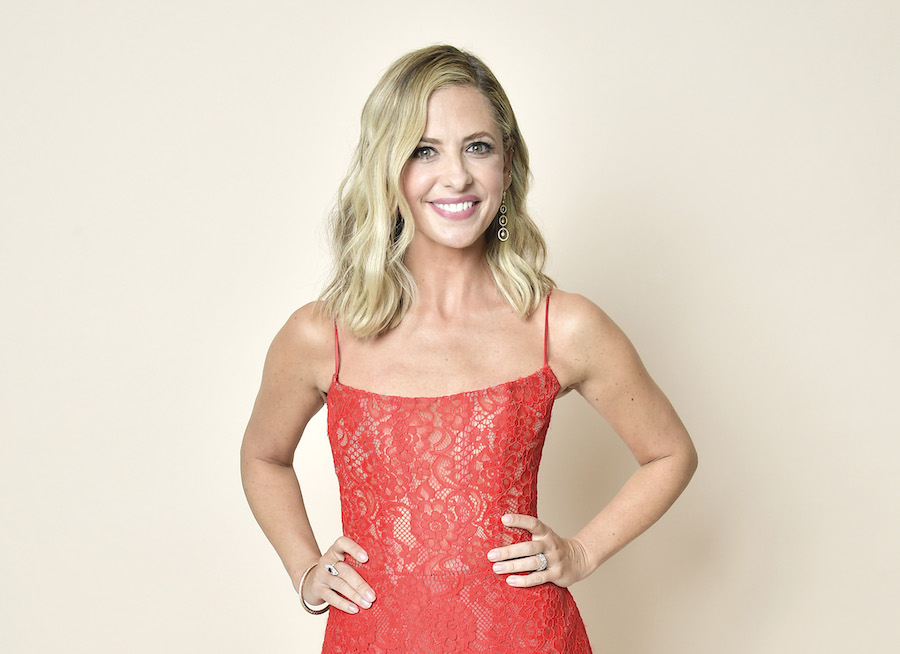 Arguably one of the most well-known “It girls” of '90s TV and film, Sarah Michelle Gellar has no shortage of iconic roles under her belt. As fans of SMG know, the actress took a significant break from acting over the last few years, recently revealing to People Magazine that the hiatus was prompted by the passing of Robin Williams in 2014 (both a friend and co-star to Gellar). Gellar stated that, after Williams passed, she reflected on her career and role as a mother, stating, “I needed that break to be the parent that I wanted to be.”

However, it seems as though that break for Sarah Michelle Gellar is coming to an end. Recently, Gellar starred alongside Camila Mendes and Maya Hawke in Jennifer Kaytin Robinson’s new teen dark comedy Do Revenge as the Headmaster of the prestigious Rosehill Country Day school, and she was also announced as a cast member and Executive Producer on the new Paramount+ "Teen Wolf" spin-off series, "Wolf Pack"!

We are certainly celebrating the return of the beloved actress here at Young Hollywood, as she has contributed to some of our favorite childhood memories with some truly iconic roles!

SMG has been acting since she was 4 years old(!), making her TV debut in a Burger King commercial. got her big break with a role as the devious Kendall Hart on the ABC soap opera "All My Children" back in the mid-'90s (which she won a Daytime Emmy for), but it wasn't until her portrayal of Buffy Summers, teenage vampire slayer and ultimate fashion inspiration, in "Buffy the Vampire Slayer" (1997-2003) that she became a bona fide household name. Whether it be a vampire, a witty one-liner, or an iconic 90s outfit, you could count on Buffy Summers to always be slaying.

@btvfilms Buffy being an ultimate icon for 57 seconds straight#totallegend#icon#buffysummers#loveher♬ original sound - Candidate for what??

The same year that "Buffy" premiered, Gellar took on the role of pageant queen and aspiring actress Helen Shivers in Jim Gillespie’s now-classic '90s slasher film I Know What You Did Last Summer. Not only is her portrayal of Helen Shivers iconic as she battles to survive a murderous stalker, but Gellar also met her longtime husband, Freddie Prinze Jr., while filming this movie, and they’ve been married since 2002!

Later that same year, Sarah kept up her rising reputation as '90s scream queen with a cameo in Wes Craven's Scream 2. Though the role was small, Gellar still managed to stand out as smart and tough Windsor College student, Cici Cooper. Although Cici is a victim of Ghostface’s brutal slashings, her character has one of the most memorable chase-down scenes of the entire Scream franchise!

Departing from her usual portrayal of lovable and sweet characters, Katheryn Merteuil in Roger Kumble’s Cruel Intentions (1999) is the resident mean girl and main villain of the film. Katheryn is an elite Manhattan prep school student with vicious ways and an overwhelming need to succeed. This role really showed off Gellar’s versatility as an actor, given the stark contrast between Katheryn versus Buffy!

In 2002, Gellar did something a little different by taking on a role that was already iconic and making it completely her own -- Daphne Blake in Scooby-Doo! Similar to Buffy, Daphne was also known for taking down monsters, solving the Scooby-Doo gang’s mysteries, and always rocking a fashionable ‘fit while doing it!

A sequel to Scooby-Doo soon followed, and she returned to her horror roots in back-to-back The Grudge movies as Karen Davis. She also lent her voice to characters Ella in Happily N'Ever After and April O'Neill in TMNT (both in 2007), plus a slew of other TV appearances in shows like "Sex and the City" and "Robot Chicken", reprised her role as Buffy in 3 episodes of the spin-off "Angel", and even hosted "Saturday Night Live" 3 times! Icon behavior.

We can’t wait to see what roles Sarah Michelle Gellar takes on next, but in the meantime make sure to check out Do Revenge on Netflix now!