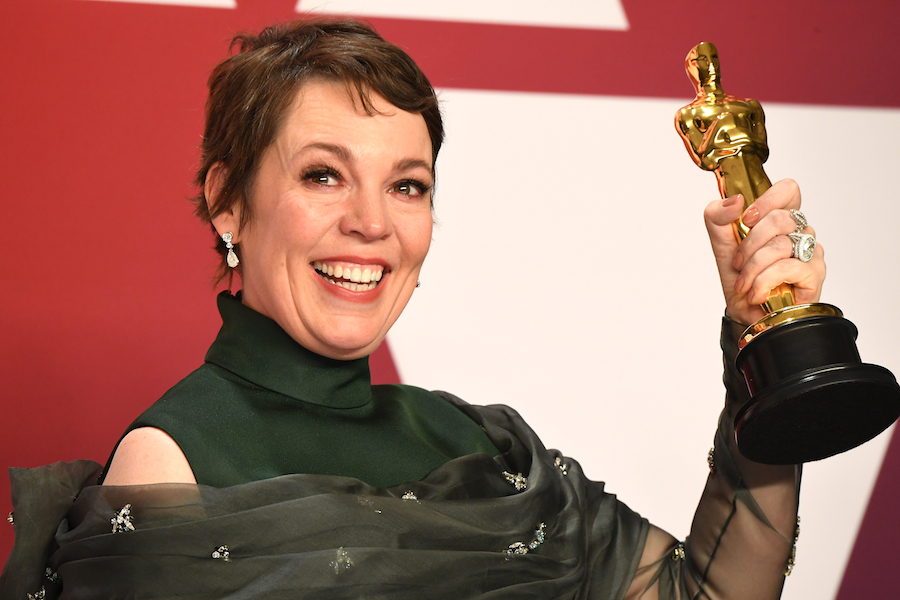 Where to even begin? Olivia Colman, who actually has three first names because that’s how important she is (Sarah Caroline Olivia Colman), is my new favorite person. The greatest gift to come out this year’s Awards Season is our collective discovery of her hilarity and her new girl gang with Emma Stone andRachel Weisz. We’re obsessed.

Olivia has long been a staple of the British TV and film world. As a graduate of the Bristol Old Vic Theatre School, she got her start working in television, and it’s no surprise she was a comedy queen. Her big break came for her role as Sophie Chapman in the popular Channel 4 comedy series "Peep Show", which she starred in for the entirety of its run from 2003-2015. At the same time, she also carried roles in "Green Wing", "Beautiful People", "Rev.", "Twenty Twelve", and "Fleabag". Talk about multitasking.

She won BAFTA Awards for Best Female Comedy Performance for her performance in Twenty Twelve and Best Supporting Actress for Accused, both in 2013. She was just getting started, though -- Olivia then stepped it up a notch and won the BAFTA for Best Actress in 2014 for her dramatic role as detective Ellie Miller in the hit series "Broadchurch" (it’s on Netflix now, just waiting for you to binge).

And there’s more! She won Best Supporting Actress at the Golden Globes in 2016 for "The Night Manager", a thrilling miniseries that she starred in opposite our favorite God of Mischief Tom Hiddleston. But TV isn’t the only thing Olivia’s been up to. She has had major roles in Hot Fuzz, The Iron Lady, Locke, The Thirteenth Tale, and The Lobster, which was directed by Yorgos Lanthimos. Lanthimos clearly liked her, as the two collaborated again last year in his critically-acclaimed film The Favorite. Liv’s (can I call her Liv? I feel like we’re friends but maybe not) portrayal of Queen Anne of Great Britain won her multiple awards this season, including the highest honor: the Academy Award for Best Actress.

Clearly, she was meant to be Queen, as she’s stepping into the famous shoes of yet another English monarch, Queen Elizabeth II, in the upcoming 3rd and 4th seasons of Netflix’s The Crown. It was announced all the way back in 2017 that Olivia would be taking over the role from Claire Foy as Seasons 3 and 4 follow Queen Elizabeth through the third and fourth decades of her reign.

Olivia Colman is a jack-of-all-trades. Drama, comedy, television, film... She has done it all and continues to be one of the most revered actresses in Hollywood. We bet she would throw a heck of a party too. Congratulations on the Oscar, Olivia, we love you!