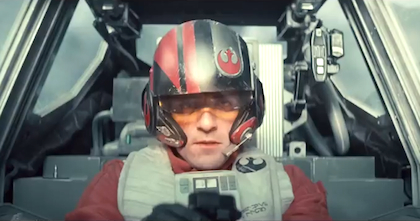 Last week, this country’s biggest national holiday took place. I am of course referring to the debut of the teaser trailer for Star Wars: The Force Awakens.

I happen to be a fan of the Original Trilogy, and I’ll even go as far to say that I like Star Wars so much that I even recognize the existence of the prequels. But now is not the time to look back at the follies of mankind. Instead, we should look forward and clap our fellow brothers and sisters on the back with good cheer, for the latest chapter in the Star Wars saga draws closer, and it was partially written by Lawrence Kasdan! For those that don’t know, Kasdan was the most excellent writer that gave us The Empire Strikes Back, which is often referred to as “The Wrath of Khan” of the Star Wars series. It is a happy time indeed, and we should all celebrate by watching the trailer one more time.

Aw, come on! A whole freaking year we gotta wait for this?! Now that is not a complaint per se, but merely an expression of excitement, because that trailer is pretty damn awesome! The teaser opens with a shot of the desert, presumably Tatooine, but maybe not since this isStar Wars and they have at least a few million desert planets to choose from. But it’s probably Tatooine because it is a familiar location that seems to exist as the epicenter of this particular universe.

So, after staring at some sand for a few seconds, we are greeted with the welcome sight of John Boyega! Boyega proved back in 2011 that he could carry a movie when he starred in an excellent little sci-fi fest called Attack the Block. He is a fine actor and a welcome sight in a film series known to feature odd things like Jar Jar Binks and Midi-Chlorians. Oh, and if you listen closely, you’ll hear the sounds of a probe in the background. Those sounds are exactly identical to the sounds of the imperial probe that Han Solo destroyed when they were hiding on Hoth in The Empire Strikes Back. So, what does this mean? Well, it could mean that Boyega defected from the Storm Troopers (formerly known as the Clone Troopers) and that the probe you hear is actually searching for him. Or he could be searching alongside his fellow troopers for something very valuable to the Empire, and they have deployed imperial probes to help with the search.

Now, you see, right there I could go on and on about of all the little Easter Eggs and possible clues that are contained within this trailer. But I’ve got to start my Christmas shopping, so I’ll narrow the rest of this examination down to a few key bullet points...

- People have pointed out there are no stars in the actual Star Warstrailer. Do you honestly think that filmmakers forgot to set a few scenes in space? Is that what you really think? If so, then please stop thinking that right now.

- ActressDaisy Ridley could easily be the “Luke Skywalker” of our story, as she appears to be a resident of Tatooine and is flying a hovercraft that looks like a farming vehicle. (Psst! Hey, angry nitpickers, it’s supposed to look like the front part of a John Deere-type tractor. The filmmakers know what they are doing.)

-Oscar Isaac is flying an X-Wing while composing a sweet little folk song in his head. Well, the latter part probably isn’t true, but there isn’t much else to say about that moment except that they are establishing him as a professional pilot. Perhaps that will mean something later on in the film if he encounters a “piece of junk” spacecraft that needs a good pilot...

- The Empire is still around after 30 years. The destruction of the Death Star in Return of the Jedi was a huge victory, but it certainly doesn’t mean that the rest of the Empire just disappeared in a puff of smoke. Perhaps The Empire is still in control and the Star Wars have simply raged on. Or, perhaps The Empire only exists in small factions and they have become more like the Rebel Alliance. Maybe the New Republic is an even more corrupt system than the Empire, and folks like John Boyega’s character feel justified in aligning themselves with The Empire.

- The new lightsaber is cool. Yes, you could burn yourself with the cross-guard, but I imagine a Jedi or a Sith lord is probably well-trained and knows how to not injure himself with his own weapon. Yes, another lightsaber could just slice through the metal parts of the cross-guard, rendering it useless, but theoretically another lightsaber could just as easily cut through the actual person wielding the red lightsaber. You see, it’s called a fight for a reason. Also, the medieval look of the new saber hints at learning more about the history of the Sith and the Jedi, which is something that has been lightly talked about but never fully explored.

I’ve honestly got nothing bad to say about this trailer. I felt like I was actually watching scenes from a Star Wars movie! And this time, the sum total of my filmgoing experience feels like it will go beyond watching a collection of happenings filmed inside of a studio against green screen. This new film has a tactile feeling that is so very necessary when one is trying to make these kinds of movies, because that feeling is an integral component in transporting audiences to another time and place. And to all you cynics out there grumbling about Big Business and how the studio just wants to make money, well, you are welcome fume about all that jazz until your little hearts are content. As for me, I’m just happy that Star Wars is back.