Why You Need To Watch Cazzie David's Millennial-Friendly Webseries "Eighty-Sixed"! 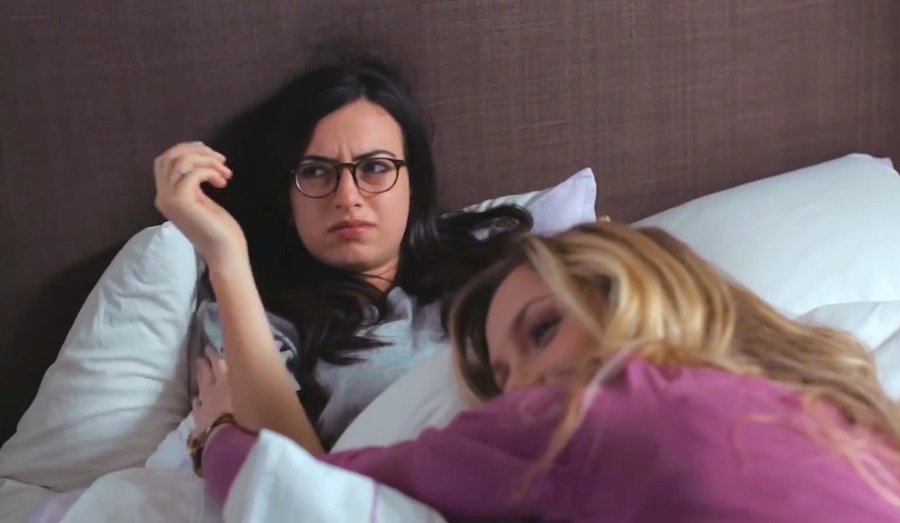 Larry David made us all laugh with “Seinfeld” and “Curb Your Enthusiasm”, but now his daughter is here to fill the comedy void that young people need now that Larry David is 70 years old and doesn’t quite resonate with the millennial generation anymore. Cazzie David, Larry’s 23-year-old daughter, has made her own web series called “Eighty-Sixed”, which she writes and stars in. So far, there are six episodes, each ranging from four to twelve minutes.

The show follows Cazzie as a girl named Remy who’s trying to get through a break-up with the help of her friends Owen and Lily. Between the three of them, they perfectly portray both the stereotypes and realities of average millennials. In one episode, the three are sitting at a table for brunch and Lily and Owen are both on their phones. In response, Remy says “Can you guys get off your phones? Or can one of you get off your phone so that I can get on my phone?” Never have more accurate words been said. As soon as adults see three young people on their phones, they all immediately start scoffing at modern social habits. Remy, like all of my friends and me, wishes to avoid these stereotypes and accusations.

And Cazzie’s humor mirrors her father’s biting social commentary and paranoia-induced comedy. There’s a scene in another episode in which Remy and a friend go hiking and she refuses to share her water with her friend since she’s a germaphobe. The scene goes on for a while as Remy and her friend debate the merits of “waterfalling” and other aspects of sharing water. It’s almost like a scene out of “Curb Your Enthusiasm”. The apple doesn't fall far from the comedy tree!

The fact that we never actually meet Remy’s ex adds to the relatable aspect of the show. She goes to incredible lengths to prove to him through social media that she’s just fine without him, and even tries to spy on him with a drone. In restaurant-speak, “eighty-sixed” means you’re out of an ingredient or menu item, or it can mean that something’s rejected. Cazzie’s webseries perfectly illustrates her personal issues of feeling rejected from her ex’s life, and that she’s not really living her best life at this moment. While shows that target millennials are hardly a new concept, the fact that Cazzie is herself in this age group helps the show resonate with this targeted audience. And by being a part of this generation, she accurately depicts the effects that smartphones and social media have on our daily lives. It’s a scary reality that she’s brought to light, but it’s a reality that should echo in many of our lives since the parts of the series that highlight this are hilarious and will make you realize how ridiculous our lives have become.

In short, if you’re looking for a hilarious show that you can finish in an hour, then this webseries is for you. And if you’re in this millennial age group, then you definitely shouldn’t pass this up.