Why 'Tomorrowland' Won't Be Your Average Summer Blockbuster 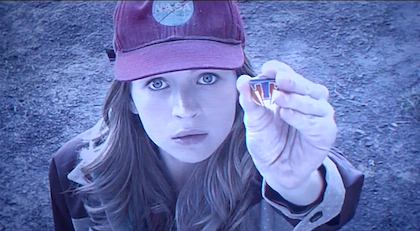 My excitement for the release of this film is so great that I am admittedly sometimes a little baffled by it. When you break down the story components of Tomorrowland, you’ll see a lot of familiar things: a recluse who turns out to be a heroic figure; a kid who is, in affect, a sort of chosen one; and a fight to save the future by correcting things in the past or present. “It’s all been done before” is a common expression that you’ll hear uttered in most film circles, and while it may be true, it is only true in a very general sense. The thing that people forget is that, while every basic kind of story has already been told, there are still limitless opportunities to shape those stories in order to present something that is still creatively invigorating. Just watch the latest trailer for Tomorrowland below for an idea of what I am talking about.

So, as you can see, all of the story elements that I listed above are present in the trailer, but in no way am I pointing this out with any negative connotations. What you are seeing when you watch the trailer is a film in which basic ideas are taken and made beautiful and exciting by imagination. At least this is my hope for the film. And I’ll be the first to admit that I tend to get a little tired of special effects extravaganzas every now and then, but when one like this comes along where the effects actually seem to support the story as opposed to just existing for sheer "spectacle", then you have essentially already purchased my movie ticket for me.

This is, of course, a Disney movie, and the theme that Disney has promoted since its very beginning has been an exploration of the world with the use of imagination. The title of the film and its lynchpin are taken from a section of the Disney theme parks called Tomorrowland. As a youth, I used to wander about that portion of the theme park simply awestruck, not just because of the incredible rides and futuristic contraptions, but because the theme behind each one of them was that people like us would one day make them all real. Brad Bird has taken that concept and added some action-packed stakes to it, but in a way that does not diminish or cheapen it. I’m not a kid anymore, true, but I am still optimistic in regards to what positive thinking and human ingenuity can produce, and as such I am excited when films like Tomorrowland come along.

We all know that the world can be a dark place, and that it’s quite unlike most realities that take place within a Disney flick. Tomorrowland acknowledges that while pointing out that the simply recognizing the world’s ills is not the same thing as changing them. Of course, at the end of the day Tomorrowland is just a movie, but the seeds of imagination and change have to start somewhere, and storytelling has been used for that purpose since the beginning of time. Well, at least that’s what I learned from all of my trips to EPCOT.

I know all we have to go on, in regards to the quality of the film, is just the trailer, but Brad Bird has proven himself twice over that he is a remarkable filmmaker, and in three months, we’ll find out of the the 3rd time is truly the charm.

Tomorrowland opens May 22. In the meantime, check out our Q&A with Tomorrowland's sure-to-be breakout starlet, Britt Robertson!