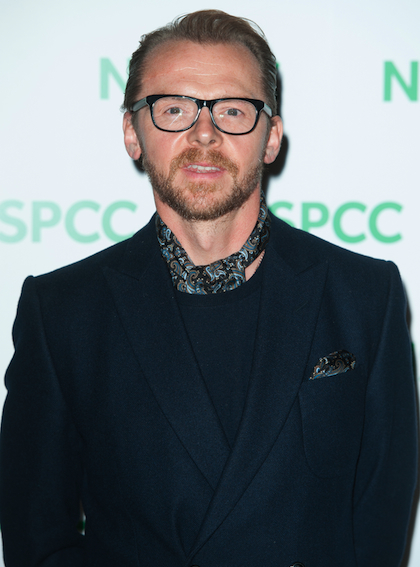 Simon Pegg has been in the first two movies of the new Star Trek film franchise, playing the role as my favorite Scottish space ship engineer of all-time, Scottie. And now Pegg just got a promotion. He won’t only be reprising his role as Scottie in the third installment, but he will also be co-writing it!

In the past, Pegg has demonstrated his love of both Star Trek AND Star Wars, so what informed his decision to write for the the former and not the latter? Could it be that he’s already been acting in the Star Trek movies and Star Trek pal J.J. Abrams, along with Disney, never approached him to write the Star Wars? Hell no. It’s simply because there is no room for his brand of British humor in the Star Wars universe. Think about it: In Star Trek, it is obvious that you can kill any enemy by removing the head or destroying the brain, just like zombies in a little film Pegg wrote and starred in called Shaun of the Dead. Don’t believe me that any of the enemies of the Enterprise can be killed by brute force? Just look at Kirk’s fighting skills from the original series (the best series, in my opinion):

Whether it’s Nazis, Cowboys, tribal aliens with tennis rackets, or some sort of alien creature with fat antennas, Kirk and his crew proved to the galaxy that blasters are for sissies. A real man or woman takes out baddies with sheer force by putting his or her body on the line. This type of knowledge, and so much more, is what Pegg can offer up to the Star Trek franchise. Let’s face it, in Star Wars, you just can’t defeat people like this. Everybody is extremely hard to kill without a lightsaber or the use of a good blaster. Even the Stormtroopers, who drop like flies due to a blaster ,are hard to kill with your hands because of their armor and helmets:

Okay, unless you’re a tiny teddy bear creature called an Ewok and are armed with sticks and stones to break some bad guy bones… which is something Pegg also understands. In his absolutely brilliant Bristish sitcom “Spaced”, Pegg has criticized certain aspects of both franchises (slightly NSFW):

I bet he wished she were drunk.

Check out Pegg's visit to the YH Studio to discuss his book Nerd-do-Well!