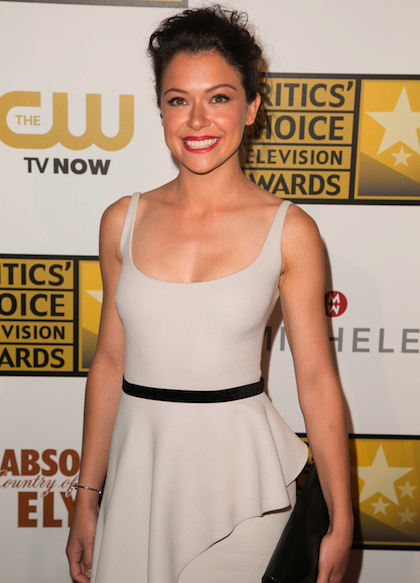 Every year, the Emmys come along and we get our hopes up, anticipating that they will nominate and award our favorite TV characters, shows, and movies. We grab a bowl of popcorn, possibly pop a bottle of champagne, sit our happy butts down on the couch, and watch the drama unfold. Someone always gets snubbed, and I can typically move on from it the next day. This year wasn’t the case. This year, "Orphan Black" was snubbed. Again. For the second year in a row. I’m not happy about it, and here's why!

"Orphan Black", created by Graeme Manson and John Fawcett, airs on BBC America and has been renewed for Season 3 [does happy dance]. Tatiana Maslany, a 28-year-old Canada native, is the star of the show, playing nine characters (yes, NINE, and counting), all clones, all trying to survive a mass killing of their creator, who we finally meet in Season 2. Season 1 opens with Sarah Manning (Maslany’s first character) witnessing a suicide of someone who looks exactly like her. Sarah soon finds out that not only is she and the other woman clones, but that there are many others just like them. She forms an alliance with other clones she later comes into contact with, and their dangerous journey to find answers unfolds throughout Seasons 1 and 2.

This show seriously messes with your brain. All of the little twists and turns leave you wanting so much more by the end of each episode. No, really, it’s excruciating. But in the best possible way. Not only does Maslany act as individual characters, she really encompasses their personalities and mannerisms, along with their crazy foreign accents, forcing you to take a double-look as she switches from character to character. That’s Emmy-worthy to me!

So, why wasn’t this brilliant show and/or actress nominated for an Emmy? I couldn’t tell you, I’m actually quite shocked. I’m not even a huge sci-fi fan, and I believe this show should have at least been nominated. I like to make myself feel better by saying that Maslany is such a superb talent that she fools her audience by making them believe she’s not the same actress.

Maslany has been ever so poised while answering media questions regarding her snubbing. She’s a classy and humble woman, which makes her even more deserving of an Emmy!

Take heart, though, "Orphan Black" fans. There’s always next year! Third time’s a charm. Until then, prepare yourselves for Season 3. #CloneClub unite!