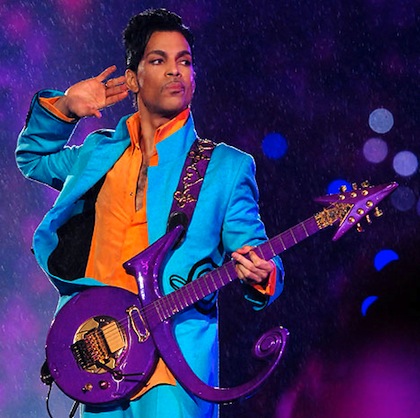 Pop/rock god and surprisingly skilled basketball player, Prince, is releasing two completely separate albums, marking his first musical release since 2010 with his album 20TEN. Only one of them the 56-year old musician considers a solo album, while the other was recorded with his all-female band, 3RDEYEGIRL. Both albums are set for released on September 30 of this year.

Plectrumelectrum is Prince’s album he recorded with 3RDEYEGIRL. One of the new songs off the album, “PRETZELBODYLOGIC” (all one word, all in caps), is available on iTunes, along with a pre-order for the album. It sounds pretty funky, but at the same time pretty hard rockin’ in a way I haven’t heard too much lately. To me, it sounds like a blend of '70s and '90s, thus creating a new funk-filled sound all its own. Prince gives much of his praise for Plectrumelectrum to 3RDEYEGIRL, going as far as to say, “No one can play like this band. People are going to try to, but they won’t be able to." If “PRETZELBODYLOGIC” is any indication of this, then he sounds about right.

As for the rest of the Plectrumelectrum, not much is known aside from a song featuring British pop singer and actress Rita Ora. The title is unknown but was released on the Internet earlier this summer under the title, “The Single Most Amazing”. There is not a song under that name on the track listing as of today, but the song will see Prince making an attempt at rapping. That’s right, rapping! I don’t know about you, but I am very interested in hearing that.

Art Official Age is Prince’s latest solo album and now has two songs available on iTunes, as well as a pre-order option. The first song is entitled “Clouds” and takes us on a musical journey back to the soulful and sexy sounds of the '70s with some '80s-influenced rapping. It sounds like some solid music for parents to put on when they tell their kids the noises coming from the bedroom are just them “moving furniture” on Christmas morning. That’s just a very specific example though… I don’t want to talk about where it came from. Anyways, the song features soul singer and multi-instrumental musician, Lianne La Havas, who just turned 25 on August 23. Happy Birthday, Lianne!

The other song available on iTunes from Art Official Age is “Breakdown”. The song is more down-beat compared to the other early releases. It’s a classic '80-sounding ballad really. There’s a lot of piano work, and during the chorus, bass is quite prevalent. It sounds more in the vein of one of his older classics, “Purple Rain”, which to inform younger audiences, is also the title of a 1984 rock opera drama that Prince starred in. On top of being arguably his most well-known film, it’s also the only film to star Prince that he didn’t direct himself. If you’ve never seen it, why not check out the trailer below?

Prince has had a career spanning decades at this point. He’s a mutli-talented musician, actor, and filmmaker, who, at 56, is still giving the world his creativity. Most people in his position retire by now, or put out re-releases of their old music, but the Prince of Rock just refuses to quit. I’m pretty pumped to hear what he’s got coming out for us on September 30. How about you, readers, are you excited for Prince’s two brand new musical releases?