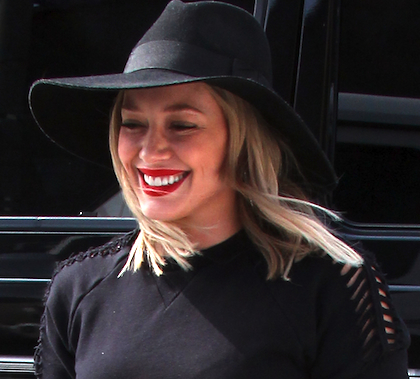 I grew up watching "Lizzie McGuire", wanting to emulate everything the iconic character did. Hilary Duff, who portrayed McGuire, was naturally an icon in and of herself, and when her song “Come Clean” became the theme song to the show “Laguna Beach”, in 2004, I didn’t think my love for her could grow any stronger.

Flash-forward to almost a decade after her last album was released (Dignity in 2007), Hilary has a new album and a fun new television show that will premiere its second season in January of 2016.

I stand corrected, my younger-self: I love Hilary more now than ever!

So, let’s talk about her new album, Breathe In. Breathe Out. I have to say I was eagerly awaiting the release of this album and was nervous that I had built up an unrealistic expectation for Hilary to meet with new music. I mean, honestly, I could never imagine a song better than “What Dreams are Made Of” circa The Lizzie McGuire Movie in 2003.

But Hil certainly met my expectations, producing an album with some beautiful lyrics, positive messages, and songs you can play when you’re feeling gloomy or giggly. I highly recommend listening to and downloading the entire album, but here are 5 songs in particular that you absolutely need to listen to:

My #1 song from her album is “Night Like This”.  This track, featuring Kendall Schmidt, not only has one of the most magical harmonies I have ever heard, but also has a cutesy clapping part that I typically dislike in records, but fits so well here. This is such a fun song to bop your head to in the car (seriously), and will put you in a happy mood instantaneously.

My other favorite songs include “Arms Around a Memory”, “One In A Million”, “Stay In Love”, and “Lies”. Each track has a unique vibe that tells a story of either individual empowerment and inspiration or heartbreak and love. Some are upbeat; others are more ballady. Either way, you need to listen to these songs.

As if you don’t have enough homework on your hands, Young Hollywood readers, I need you to check out Hil’s show “Younger” on TV Land. Hilary plays a book editor in her 20s who works extremely hard at her job but also knows how to let loose and party.  Reviews have pegged “Younger” as the next generation's “Sex and the City”, but we like to stay away from comparisons. The show is full of hilarious moments, and Hilary certainly kills it on the small screen.

What I appreciate about Hilary is that she has never been an attention-seeker but has always treated her fans, and even the paparazzi, with grace and integrity. While she hasn’t necessarily been the most buzzworthy celeb in Hollywood over the past few years, she has maintained respect from the public for her relatable lifestyle and her willingness to select meaningful projects that ultimately do well.

Unlike many other stars that grew up in the entertainment industry, Hilary did not wander into a turbulent path full of questionable decisions and lose herself. During her hiatus from acting and singing, Hilary was not just chillaxing. She was raising her 3-year old son, Luca, whom I have to say is the most adorable celebrity child I have ever seen. She also made a series of guest appearances on some hit shows like “Gossip Girl” and “Two and a Half Men”, but for the most part, she laid low.

While no person is perfect, Hilary has done a pretty good job of being my role model throughout my elementary, high-school, and college years; which, suffice it to say, is a very long time.

While she is making monumental strides in this industry, she is doing things at her own pace and creating the content she wants. She can only go up from here -- 2015 will give us the culmination of all the fabulosity that is Hilary Duff!