Who Should Replace Chris Evans as Captain America? 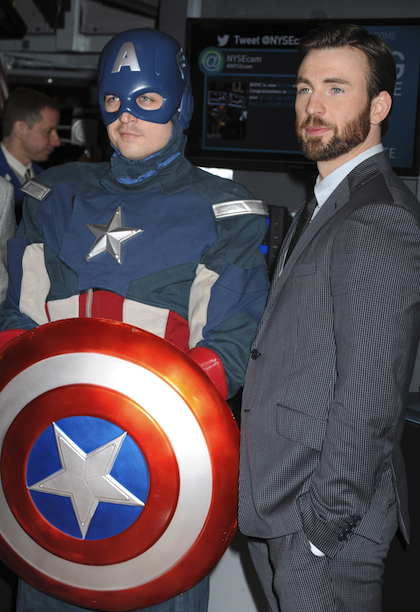 Chris Evans, known for playing the most patriotic superhero in the country, Captain America, is ready to hang up his blue mask. Evans costume is not the easiest to wear (he has joked that audiences will never see Captain America attempt to use the bathroom), nor is the challenge of playing one of Marvel’s premiere superheroes.

It seems that Evans is getting a bit worn out from his Avengers role. Locked into a 6-movie deal with Marvel, Evans has completed three so far: Captain America, The Avengers, and Captain America: The Winter Soldier, but he still has three more to go. And once he’s finished the films, Evans has expressed a desire to leave acting to pursue his real passion -- directing. He recently finished helming his first film, 1:30 Train, about a young woman who misses her train and spends the night chatting with a street musician. If Evans does indeed leave the franchise, then that means a fresh new actor will have to pick up Captain America’s shield. Hollywood does have a fine array of young gents who could take over the role. A few of my picks include:

1. Brenton Thwaites: This Australian cutie is about to get his big break in the screen adaptation of Lois Lowry’s The Giver. He also starred as Prince Philip in Maleficent. Who says that Captain America has to be played by an American? He’s got the right smolder to pull it off.

2. Channing Tatum: Okay, by the time it would be ready for him to take over the franchise, he will probably be too old. But who wouldn’t want to see Tatum in a suit perfectly sculpted to his manly muscles?

3. Max Thieriot: This relative unknown has begun to gain notice on “Bates Motel” as Dylan Massett, Norman’s older half-brother. He’s done a fairly fine job so far, and although he doesn’t have a ton of bulk to him (yet), he could probably buff up quite nicely.

4. Garrett Hedlund: Just imagine those fiery eyes and pecs in Captain America’s suit. If Hedlund is playing Captain America, Marvel could do us all a favor by having a new shirtless Captain America. Now that would be a blockbuster hit!

Who do you think should play the next Captain America?