Where Are All The Thanksgiving Movies? 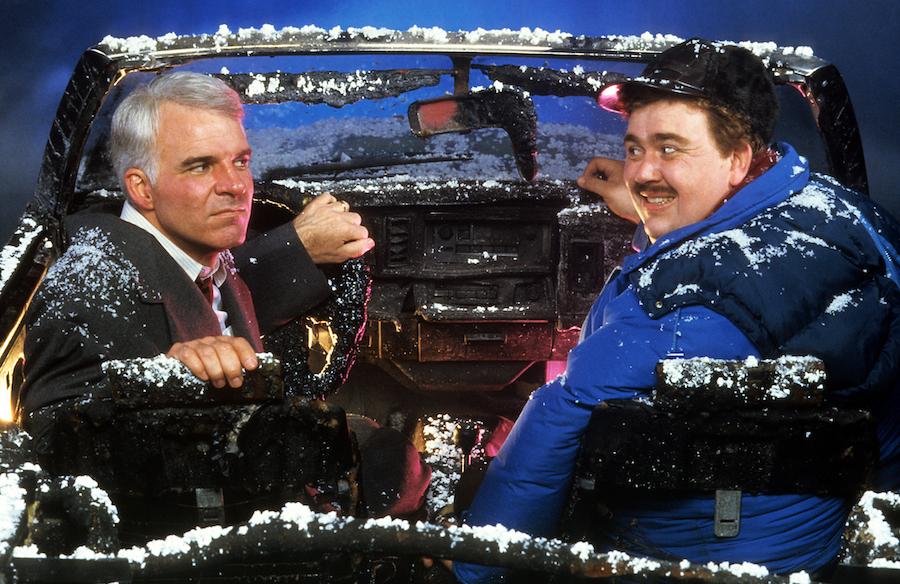 Thanksgiving is sadly one of those major national holidays that nearly everybody celebrates but gets next to no love on the big screen. Over the years, there have been Thanksgiving scenes where friends and family gather around a turkey (or, to get more with the zeitgeist, refuse a woman to leave your apartment while you start disrobing and force a kiss on her… side-eyeing at you, Rocky), and then… that’s it! Next scene, please! But why is this?

Before getting into the why, it should be noted that, while the amount of movies surrounding Thanksgiving pales in comparison to cinema & television special juggernauts Christmas and Halloween, there still are Thanksgiving movies. There’s the Academy Award-winning Woody Allen film Hannah and Her Sisters; the '80s classic The Big Chill, about old friends getting together and catching up over Thanksgiving dinner (spoiler: drama ensues); Four Brothers even mainly surrounds around a family getting together for Thanksgiving but then a revenge plot occurs; even Paul Blart: Mall Cop revolves around Thanksgiving, although to be fair it's more a "Black Friday" movie than a Thanksgiving one; and then there's the 1991 comedy Dutch, about Ed O'Neill basically kidnapping his girlfriend's bratty son from prep school to bring him home for Thanksgiving (spoiler: wackiness ensues). Sitting at the top of this list for most people would be the John Hughes comedy starring Steve Martin and John Candy, Planes, Trains and Automobiles.

As you can see, it’s a funny odd couple pairing about a Thanksgiving journey home gone awry. In case you have never seen it and are now interested, I will try to be as spoiler-free and cryptic as I can while pointing out, where the heck is the turkey feast from the trailer? Much like another Hughes holiday classic that is probably more popular since it’s about Christmas as opposed to Thanksgiving (and rated PG instead of R like the former), Home Alone, the story is more about being with family during the holidays rather than the holiday itself. Home Alone (spoiler coming! but who hasn’t seen it?) ends on Christmas Day, but we don’t see the family actually celebrate Christmas. It’s more about the fact that they’re all finally back together rather than the holiday itself. So even though it can be assumed that more of America’s population celebrates Thanksgiving over Christmas, why does Thanksgiving get the cinematic shaft?

I’m going to tell you right now to throw out the “it’s because the overseas market doesn’t celebrate Thanksgiving” argument. We’ve been making Christmas and Halloween movies for much longer than we’ve been exporting films on this level to other countries, and since most holiday movies are comedies, which traditionally don’t translate well in other countries and are rarely released overseas, makes that not part of it. But there’s a turkey the size of an elephant in the room gobbling away and it’s pretty obvious… Thanksgiving is pretty simple.

Sure, I like Thanksgiving as much as the next person, but when you get to be college-age or older and you don’t live close to your family anymore, which holiday are you gonna pick to go home for? Christmas! I even have friends who don’t celebrate Christmas that would much rather go back for it because of the grandness of it all and the fact you typically get a longer break due to New Year's being a week later. With its four-day weekend and the rage of Black Friday commencing before the leftovers are even cold, Thanksgiving is kind of the potted plant next to the new puppy of Christmas. Plants are cool to have as another life force to take care of, but they can’t do tricks or be constantly adorable like a new puppy. Then there are the rituals of each, and this is where Halloween comes into the picture...

There’s a different kind of magic to each of the rituals for the holidays. No matter your age, on Halloween, you can dress up if you like and have parties or engage in complete debauchery with your friends. The younger crowd will go around destroying stuff through an adolescent purge of mailbox destruction and toilet paper in trees that cops in certain areas will turn a blind eye towards for some reason. The youngest crowd gets to go out with their families and beg complete strangers and neighbors for candy in a ritual that dates back to a time where, if they didn’t pony up the sweets, you’d throw a Molotov cocktail through their window.

Then Christmas, in some families, becomes a two-day affair, due to Christmas Eve, where people gorge on foods and drinks, sing songs, check out decorations around town for a month or longer... there’s more for companies to market with characters carrying the holidays like Santa and his reindeer... we somehow feel warm even though it’s freezing in much of the country... and, of course, giving and receiving presents because since it’s Jesus’s birthday! (It’s really not his birthday, but that's another story.) No matter what you and your family do with Christmas, it can’t be denied that it fills our world with magic. So… what’s Thanksgiving got?

Thanksgiving takes a part of Christmas by everyone getting together and eating too much food and drinking a lot, except this time football is involved too. So, if you don’t like football, you’re gonna pretend you do because shut up, it’s Thanksgiving! But that’s about it for what it got from Christmas. There’s really no decorations (in fact, most people nowadays have Christmas decorations up by the time Thanksgiving hits), half of your family is waiting until 6PM when they can scarf down their early dessert of chocolate pudding pie and run to Target for all those Black Friday deals, and, unlike Christmas, where family traditions take over and food is whatever you guys enjoy, there’s a set menu by… whoever invented Thanksgiving, Abe Lincoln?

I remember in elementary school we learned that story of Thanksgiving where the pilgrims and Native Americans got along but that’s not really true in retrospect. So for some reason we all gather around to eat stuffing, whatever that gelatinous mess cranberry sauce is, and then carve and eat a turkey every year in what could only be labeled as a ritual sacrifice. While at the dinner table, at least one of your relatives drinks too much and chastises the rest of the family over their life choices, says “THOSE people are the real problem with America”, and tries to get into a fist fight over that train set your grandpa inherited from their now-20 years deceased parents because he claims it belonged to him first… We get it, Uncle Gary, you have a lot of stake in those trains but can’t we have one happy Thanksgiving already?!

While Thanksgiving movies are few and far between, there’s still room to make them. Eli Roth’s best movie is the fake Thanksgiving horror movie trailer he made for Grindhouse. “Master of None” did a pretty bang-up job with an award-winning Thanksgiving through the years episode and released it practically a year before the holiday would strike again. Who’s to say there isn’t potential for new and different stories to be told around it? Sure, Thanksgiving is so wrapped up in its strict traditions, but at its core it is mainly about families wanting to get together, so it’s only a matter of time before people realize there’s more to explore there. Until then, it looks like we’ll all gather around and happily watch Planes, Trains and Automoblies… when there’s no football on, of course!

FYI: Here’s a long gone but much needed Thanksgiving tradition: