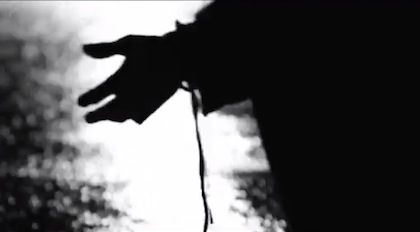 Ah, what’s that lovable scamp up to now??

The Master of the Mysterious himself, J.J. Abrams, has the blogosphere once again buzzing and befuddled thanks to a teaser entitled “Stranger” he just released. The greatest aspect to the mystery is… nobody knows what it’s a teaser for!!!

Abrams currently has no less than 22 projects currently in development, not counting the 8 or so that are either in post-production or the early stages of pre-pro. So, really, this could be anything. Check it out below.

Well, that was certainly creepy. And definitely enigmatic. It’s no surprise that some are speculating that this could be hinting at a “Lost” spin-off, given the many similarities to the cult favorite TV show, right down to the music (and even the actual use of the word “lost” in the voice over).

As epic as that would be, it’s highly unlikely. The two most prevalent theories at this point are that it is either a teaser for an upcoming NBC series entitled “Believe” or it’s actual a book trailer for a collaboration with novelist Doug Dorst, called simply S.

I’m kind of hoping it’s the latter, if only because it may spark a movement that brings book trailers into the mainstream. They’ve already been around forever (some filmmakers make their bread-and-butter off of them), but they are sort of the red-headed stepchildren of the independent filmmaking world. Nobody has ever really tried to elevate them to a true art form, and considering how books themselves continuously get short-shrifted in favor of their cousins Movies and Television, it’s no wonder. However, if someone like J.J. Abrams could suddenly make book trailers “cool”, it could open the floodgates for aspiring filmmakers to cut their teeth on them AND inspire more cinephiles to pick up a book! Win-Win!

Either way, we’re bound to get some answers soon. Then again, I watched “Lost” for 6 seasons, so… maybe not.

What do YOU think this teaser is all about?