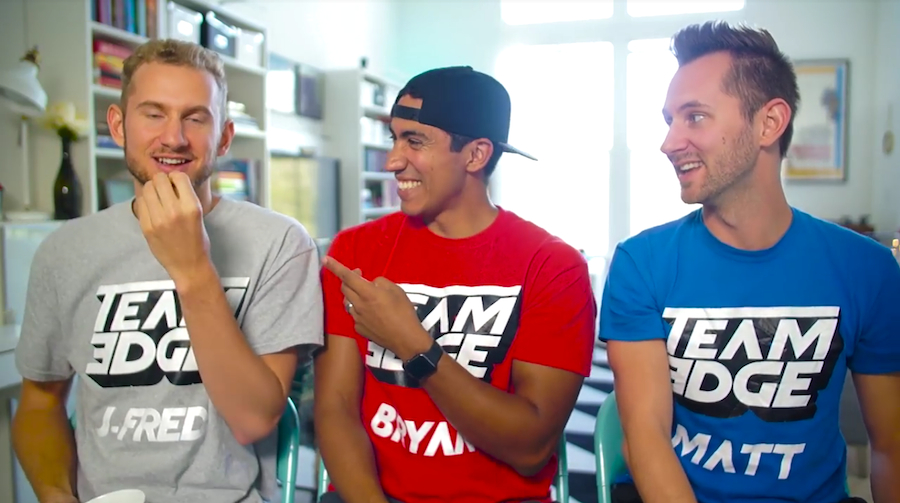 If you like games, challenges, and all-out crazy fun competitions, then you need to check out Team Edge!

Team Edge is a YouTube channel started by three brothers, Matt, J-Fred, and Bryan. Complete with their own intro music and sequence, these guys play any and every game you can imagine, from Jenga and Spikeball to Cup Pong and even just Water Bottle Flipping! If it's a game, or can be turned into a challenge, these guys are down!

Check out their twist on Cup Pong:

If Matt, AKA Matthias, looks familiar to you, then I commend your in-depth YouTube knowledge. Matthias is known for his win on Season 2 of "Internet Icon", a YouTube competition series to find the Internet's Next Icon! Matthias is a very talented filmmaker and YouTuber and he has his own channel where he does unboxing videos. He also has a vlogging channel with his beautiful wife, Amanda.

Matthias has really created a family business with his brother J-Fred and brother-in-law, Bryan, with Team Edge. Bryan and J-Fred also have their own individual channels here and here.

These guys make a great team and are hilariously competitive with each other, but they also have awesome guests to join them in their shenanigans, such as my girl Megan Batoon.

Oh, and have you heard of Markiplier?

As you can see, they are not afraid to let their inner child out. But as much fun as they have, Team Edge works hard posting three videos a week and always tries to engage with their fans commenting on their videos. Their games and competitions are very creative and sometimes they get messy. Actually, a lot of the time.

Team Edge is always trying to up the ante and they are ready to take on any game and any challenge no matter what the punishment is!

I love a good food challenge.

Team Edge also has a gaming channel where they play video games!

The whole Team Edge family is awesome and hilarious, so check out their channel to see what insane and intense challenge they will take on next! They upload Mondays, Wednesdays, and Fridays at 4pm.