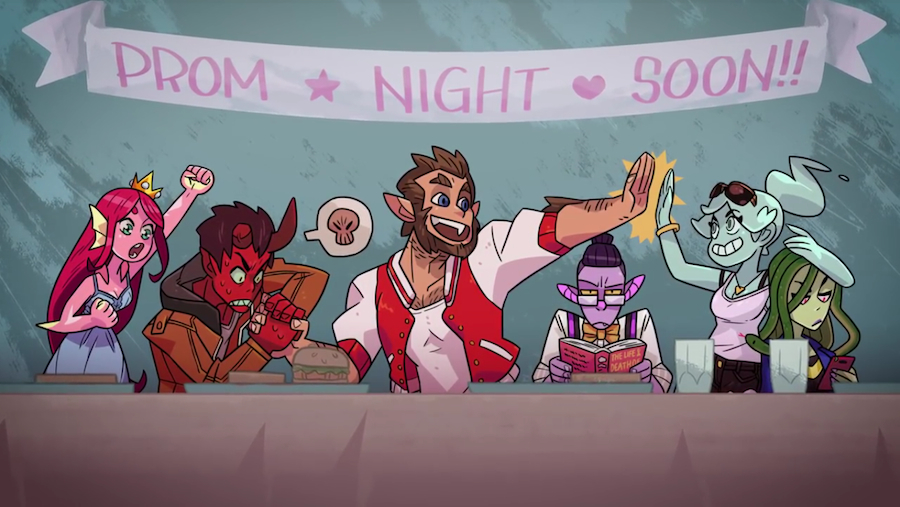 Teen Paranormal Romance has become an exceedingly popular genre in the past decade, leading to several entertaining narratives that involve everything from vampires to demons to zombies. It might sound strange, but the appeal seems to be universal, captivating readers of various ages despite its target demographic. After all, acceptance from the undead is more fascinating than attention from the living...

Dating simulator Monster Prom is the latest game from Barcelona-based developers Beautiful Glitch, in which players must attend a high school filled with monster students and woo a date for the upcoming prom. Games last between 30 to 120 minutes depending on the amount of players and how quickly you read. Although it isn’t possible to customize yourself beyond a name, you can play as one of four lovely monsters and choose gender pronouns that have no effect on your desired love interests. While there is an algorithm to attracting certain monsters, we’re not going to give that away and spoil the fun! However, we will say that you’ll have to boost certain personality traits depending on who you prefer and spend as much time as possible with them. One of the best aspects of this game is its replay value thanks to the high amount of possible outcomes. Monster Prom’s writers have developed an engaging, witty script that pokes fun at clichés, films, and even the game itself. Despite the beautiful art and colorful designs, the game does have quite a number of adult themes, so it probably isn’t suitable for fairly young audiences! (Video below slightly NSFW)

There are six obvious monster suitors, which include the fire-obsessed metal head Damien, jock werewolf Scott, hipster vampire Liam, mermaid princess Miranda, party ghost Polly Geist, and Medusa-inspired Vera. However, there are also 22 secret endings that players can unlock, which involve bringing less obvious choices to prom. Playing the game alone is already fun, but playing with friends has its hilarity-ensuing value and will add more of a challenge. Every in-game week allows players to hang out in their choice of setting, including the auditorium, library, classroom, outdoors, bathrooms, or gym. Choosing these areas changes the narrative, but only one person can be at each location per turn. Along with this, players will have to choose tables during lunchtime, and if your love interest is sitting at a table with someone else’s, the player who goes first has the advantage to take your seat. However, the order of who goes first is altered each turn.

Dating in reality requires too much effort and offers a bland selection of humans. Check out Monster Prom and enjoy the charm of the supernatural! (Or face the pain of eternal rejection...)