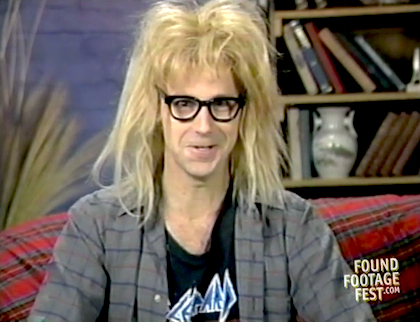 Remember the days of VCR games? Where you would pop in this ancient video medium called a VHS into an antiquated device known as a VCR player? (The meaning of these acronyms seems to have been lost in time.) From what the former NBC TV show/soon-to-be first Yahoo Screen TV show “Community” taught me about VCR games is that you kind of play on an honor system with video projections on a TV screen. It’s like that series of Scene It games that came out on DVD a few years back. (I recommend the movie version.) Except with no digital interaction whatsoever. What I do know about this technology is that it’s categorized as something called "analog". I don’t know what that is but my hipster roommate says it’s like his precious vinyl records.

Anyway, what I have dug up for you on the far reaches of the internet is a video mashing up some of the most hilarious, completely outrageous concepts that were displayed in these VCR games of the early-'90s. So sit back, relax, and enjoy some serious nostalgia:

Wow, even Dana Carvey makes an appearance as Garth from Wayne’s World and tells you that you have a pretty lame-sounding name, which seems to be part of the point of these games. Personally, I think I like that skull and cross bones pirate dude the most. He certainly ain’t no Captain Jack Sparrow, but he could give Johnny Depp a run for his money. Look at for the skull and crossbones pirate dude to appear in Pirates of the Caribbean: Dead Men Tell No Tales: The Curse of the Skull and Crossbones Pirate Dude coming out summer 2017.

What do you think? Who was your favorite VCR game character?