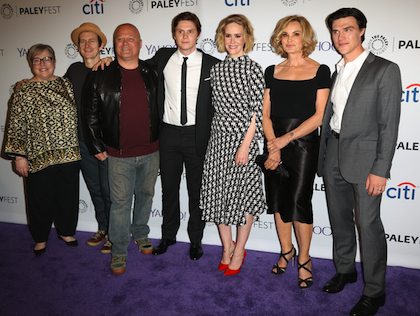 This past week, the second-half of the annual PaleyFest was held at the Dolby Theatre in Los Angeles. The cast and crew of a slew of hit shows came out to share interesting tidbits (and, in a few cases, spoilers!) on their shows. Here’s a recap of some of the most exciting moments:

“American Horror Story” Stars revealed where they think would be the scariest "Horror Story": The cast and crew of “American Horror Story” closed out the PaleyFest with what was the most popular panel. Thousands of fans came to check out the “freaks”, who were more than happy to reveal what they find frightening. Finn Wittrock, who played the deliciously devious Dandy this past season, revealed that he thought a horror story set in space would be terrifying, due to the lack of oxygen and sound (that may not make for the most exciting television, though, so I don’t think Wittrock has to worry). Sarah Paulson, who has appeared on all four seasons of the show, felt that a season set in a plane descending to the ground would be disturbing. She stated that the whole season could be about the passengers trying to stop the plane (that sounds a bit like a reverse “Lost” to me... I would watch that season). And, finally, Denis O’Hare, who played Stanley on season 4, stated that the most nightmarish season could take place inside Sarah Palin’s head.

Not many details were revealed about the fifth season, other than the sad news that Jessica Lange will not be returning and that Lady Gaga, Matthew Bomer, and Cheyenne Jackson will star; the fifth season will take place in a hotel.

The Ladies of “Arrow” discussed the joy of playing kick-ass female characters: Willa Holland, Katie Cassidy, and Emily Bett Rickards could not be more thrilled to star on The CW’s crime-fighting dramedy, “Arrow”. The three ladies play Thea, Laurel Lance (who is now the Black Canary), and Felicity Smoak on the show and are becoming fan favorites -- the loudest cheer of the night came when Rickards stepped on stage, not Steve Amell (who actually plays the title character). Holland stated that she is so proud to play a true warrior, and Cassidy mentioned how she has enjoyed Laurel’s transformation from a reserved lawyer to a true superhero. Hurray for a show with strong female characters!

In terms of the later half of this season, Amell teased that we will see a “more introspective, vulnerable, and somewhat defeated Oliver” this season, and that Felicity might become an obstacle for him.

“The Flash” released a trailer with MULTIPLE spoilers for the rest of this season (do not keep reading if you want to avoid spoilers!!): The CW’s freshman show and spin-off to “Arrow”, the cast and crew of “The Flash” greeted dozens of ecstatic fans, and made them even more ecstatic when they released a trailer for the rest of this season, loaded with quite a few interesting tidbits, including:

- Felicity will have an arch nemesis (on THIS show)!

- Iris (Candice Patton) and Barry (Grant Gustin) start to really like each other... which incidentally makes Eddie (Rick Cosnett) punch Barry in the face (as these things happen).

- And Mark Hamill will appear as a villain, because why not?

That’s a lot to take in! Here’s the trailer to check out even more spoilers: