"Unbreakable Kimmy Schmidt": 7 Best One-Liners From the Premiere to Get You Psyched for Season 4! 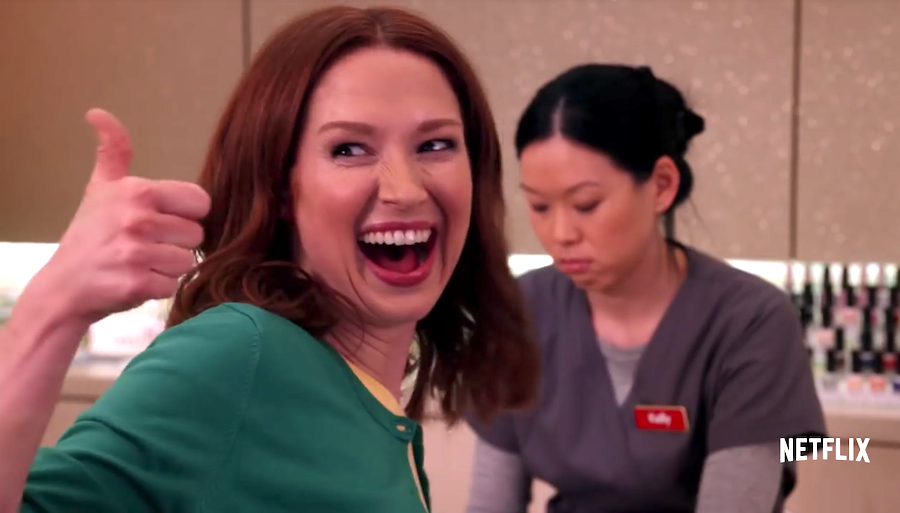 "Unbreakable Kimmy Schmidt" is back on Netflix with a new season and I am proud to say I did not binge-watch it all in one sitting. There are only six episodes so far, as only the first half of what is unfortunately the final season has been released, with the other 6 not slated to be released until January of next year!

Rumors are swirling that Season 4’s grand finale might be a movie, something I would support because 30 minutes of this Tina Fey-created work of pure hilarity is just not enough.

If you don’t watch "Unbreakable Kimmy Schmidt", I highly suggest giving it a try. It is a rather unconventional show, as it follows the life of -- you guessed it -- Kimmy Schmidt (Ellie Kemper), who, along with three other women, was locked in a bunker by a Reverend who told them the world had ended. After her release into the real world that does in fact still exist, Kimmy moves to New York City, where she moves into the scheming and devious Lillian Kaushtupper’s (Carol Kane) building, lives with extra dramatic yet extra fabulous roommate Titus Andromedon (Tituss Burgess), and ends up working for a wealthy mother of two, Jacqueline Voorhees (Jane Krakowski).

The whole show is a chaotic scene but is known for its many quips and witty dialogue. Don’t believe me? Well, let’s take a look at the best one-liners from the season premiere!

These are arranged chronologically. Fair warning: many of these quotes are delivered by the sassy and always honest Titus!

1. After Lillian details the final wishes of her now-deceased boyfriend and where to scatter his ashes to Titus, he finds it appropriate to tell Lillian his post-life wish:

“FYI, when I die, I wanna be placed in that Bodies exhibit so that I can be thin and looked at.”

2. Kimmy laments to Titus about having problems at work, unbeknownst to him. He pretends to be intrigued and considerate. But he has a hidden agenda...

“Like what? He said as an excuse to get close enough to eat her fries.”

3. Titus’s hopelessly adorable ex-boyfriend Mikey explains a mishap at the construction site he works for… and his nonchalant delivery is what makes this super funny:

“We accidentally built the bank inside the Starbucks instead of the other way around so we had to start over.”

4. Jacqueline, the former socialite who famously ignores her children, drops a little nugget of information on her son. She has an interesting way of describing her child!

“Buckley’s now at a military academy for peculiar children.”

5. After Kimmy has a sexual harassment claim filed against her at work, she brings home the file and shows Titus. His reaction is theatrical as always, so please read the following line with the tune of “Chim Chimney” from Mary Poppins in the back of your mind. Priceless. Probably my favorite line of the episode...

6. "Unbreakable Kimmy Schmidt" is not one of those shows that takes place in a faux-Merica. The writers have made a conscious effort to incorporate and reference real people and real scenarios going on today. Titus and Kimmy discuss work-place discomfort, and that recently people have started standing up for themselves when they are in an uncomfortable office environment. Kimmy doesn’t understand how her niceness could be perceived as anything but just that, so Titus explains the epidemic and why it’s important. His additional personal candor is so appreciated...

“There’s a reckoning going on, and it is important -- and as overdue as the library books I’ve been using as abs.”

7. Disappointed that her niceness has lead to other people’s discomfort, Kimmy says the most Kimmy-esque thing:

“All I ever wanted to do was make the world a better place. But I guess now I’ll fire people and not care if they’re sad.”

Those were the seven best one-liners (in my opinion) from the episode, but the entire 30 minutes is comedic gold. I can’t wait to continue watching, but I’m going to have to hit the Pause button on my usual binge-watching habits so i can savor these six episodes until January 25!