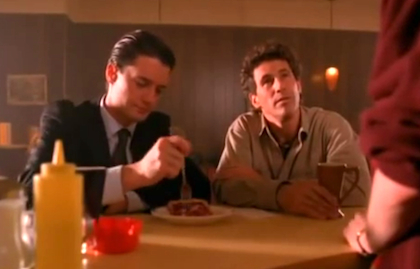 Good news! Showtime and writer/director David Lynch have finally come to an agreement on the new and long-awaited third season of “Twin Peaks”. After an uphill battle to get Lynch the money he needed to make “Twin Peaks” the way he wanted, he not only got his wish but he was also given enough money to make even more episodes than originally promised!

This new season of “Twin Peaks” is slated to have 18 episodes instead of the original order of 9. Even more important to the show is the fact that the original diner, known in the show as the Double R Café and in real life known as Tweed’s Café, is being refurbished to encapsulate the '90s glory it once had during the show’s original run. If Tweed’s decides to keep the diner in the '90s, then it will surely be a hotbed for tourist activity, so get ready to load up your motorcycle and rush over to North Bend, Washington, for a hot slice of cherry pie and coffee as black as a moonless sky!

In other “Twin Peaks”-related news, on top of Lynch being back on to direct every episode, his “Twin Peaks” co-creator Mark Frost is back onboard as well. Frost did a lot for the show, though considering how much Lynch is associated with the series, it’s easy to forget that Frost was involved as heavily as he was. Outside of that, it looks as if most of the original cast will be returning… including my favorite, Log Lady! Actress Catherine E. Coulson went as far as to say, "I have kept the log in a secure, undisclosed location. In case it was called upon to come back, I've been very carefully protecting it." (I dropped a single tear reading that.)

Lara Flynn Boyle is still only listed as rumored, so it’s uncertain if she will appear again as Donna Hayward; she chose to not appear in the prequel movie to “Twin Peaks” entitled Fire Walk With Me. Heather Graham’s role as Annie Blackburn, who appeared at the end of Season 2, is still up for debate as to whether or not it will carry over to the third season. Fire Walk With Me was a bit of a sequel to the show as well as a prequel, so if you noticed Graham’s bloody cameo in the film, then you may already have guessed her unseen fate at the end of Season 2. But it was a split-second cameo, so nobody knows for sure right now. Other than that, it seems like all living cast members are set to return, including Ray Wise, despite his character being dead.

“Twin Peaks” Season 3 doesn’t have a premiere date yet, aside from the tentative year of 2016, so take a guess as to when it will happen. Until then, here at YH, we’ll creep around the woods of Washington and stay up for days, while chugging hot black coffee trying to figure out that information for you. While we do that, you should check out this clip of my favorite character at my favorite diner.