TV FROM AROUND THE WORLD: "Wentworth" (Australia) 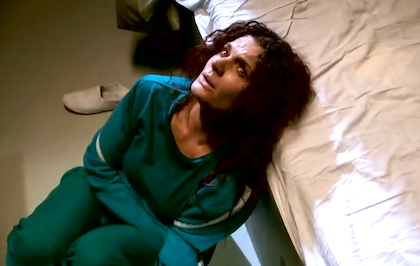 Thanks to the miracle of modern streaming services such as Netflix and Hulu, we now have access to more television shows and films than ever before. We can now revisit our favorite shows from five years ago (or even 20 years ago), and we can even become more cultured as additional shows from around the globe are popping up on streaming.

This past week, I discovered what I consider to be one of the best of these shows -- “Wentworth, the Australian cousin to America’s “Orange is the New Black”. The main difference between the two is, while “OITNB” tends to be more light-hearted and humorous with an occasional dark moment, “Wentworth” is a gritty prison drama which makes it seem like a female version of "Oz". The series, which has two seasons available on Netflix and is currently filming a third, features complex prisoners and guards -- and the prisoners have a background closer to Vee than Piper.

Based on a popular Australian series from the '80s called “Prisoner”, "Wentworth" opens with Bea Smith (Danielle Cormack), who enters prison after being incarcerated for the attempted murder of her husband (Jake Ryan). Once inside Wentworth, Bea meets Franky (Nicole de Silva, my new girl crush), one of the head ladies of prison and resident flirt, Liz (Celia Ireland), the peer mentor and peacekeeper who is a recovering alcoholic, and Doreen (Shareena Clanton), a maternal figure who harbors a dark secret. While all four of these ladies all have shady pasts, they aren’t the worst offenders -- the most frightening inmate is Jacs Holt (Kris McQuade), the other alpha female, who torments and tortures prisoners (literally). The guards are as interesting as the prisoners too. There's hunky (and I mean hunky) Will Jackson (Robbie Magasiva), who mourns the death of his wife, the former governor (warden), while the new governor (Leanna Walsman) struggles to control the prisoners and the guards. The characters are far darker than “Orange is the New Black”, which tends to take a sympathetic look at the prison system, and isn’t afraid to get down and dirty; these women commit some truly appalling acts.

What makes “Wentworth” so fascinating is that its grit level is exceedingly high (think “Oz”, “Breaking Bad”, and “Deadwood”), yet all of the main characters are women. The show isn’t afraid to show these ladies literally get down and dirty, and nor does it write off the consequences as an “action sequence” the way certain shows do. “Wentworth” follows through on all of the reprucussions of one character’s actions, and the results are fascinating to watch. The dialogue among the characters is also refreshingly real -- they don’t just shoot off witty banter for no apparent reason, they have conversations that actually sound like real conversations. “Wentworth” is also particularly interesting for non-Australians, as the show demonstrates what Australian prison life is like (albeit, it is a much more dramatized version of it).

There are also many attractive Australian men. You just can’t go wrong with that.

Check out the trailer for Season 2 below to get a good idea of what the show is all about:

Seasons 1 and 2 of “Wentworth” are available for streaming on Netflix.