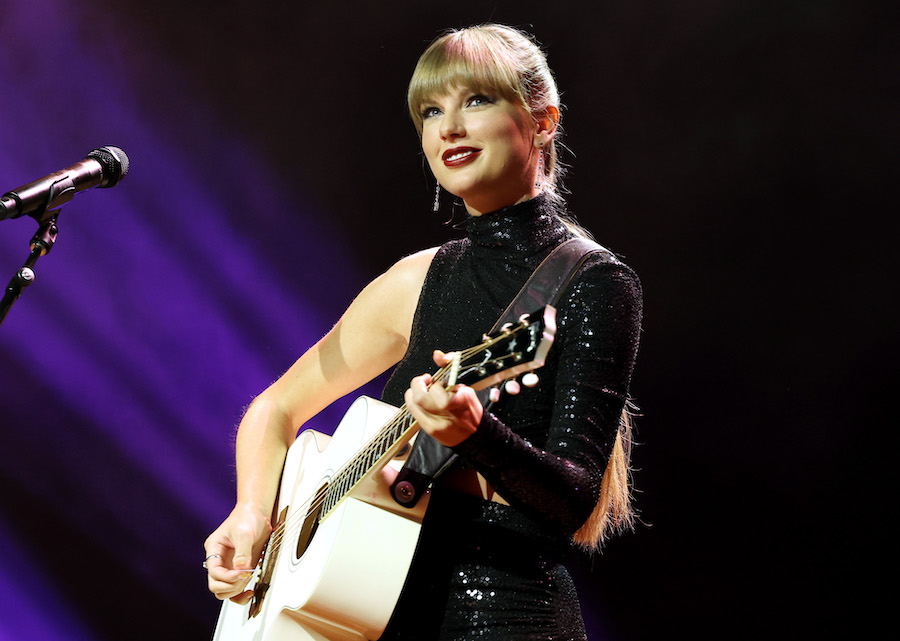 As you’re all well aware by now, Taylor Swift’s 10th studio album Midnights just dropped last Friday (October 21), and we can’t get enough! Swift worked with long-time collaborator and producer Jack Antonoff as the main artists behind the album, along with some help from other collaborators such as Sam Dew, Lana Del Rey, Sounwave (aka Mark Anthony Spears), Keanu Beats, William Bowery, and Zoë Kravitz. Midnights takes listeners through a journey of 13 “sleepless nights scattered throughout [Swift’s] life” and is full of dreamy yet powerful tracks!

Let's break it down track-by-track!

Kicking off the album, “Lavender Haze” takes its rightful place as Track 1, setting the entire record up for what’s to come. The song has a dreamy, ethereal quality to it, aligning perfectly with the inspiration behind the title, which Swift cited as a 1950s term for being so in love with someone, you enter a lavender haze. And despite Swift entering that love-trance, the lyrics also play off "the 1950s sh*t they want from me," tearing down gendered expectations of women in relationships (referenced in “the only kind of girl they see / is a one-night or a wife"), and instead just wanting to stay in that haze and block out the rest of the world! This song certainly sets high expectations for the rest of the album, and, of course, Taylor Swift exceeds them!

Favorite lyrics: “I feel a lavender haze creeping up on me / So real, I’m damned if I do give a damn what people say…”

"Maroon" switches up the pace of the album a bit, with a slowed down, more wistful sound, which makes sense given it’s a song all about recollecting on a broken relationship. In this track, Swift takes us through a period of time earlier in her life; times of carefree love and spilled red wine. Yet, as the song continues, this relationship seems to unravel, ultimately ending in heartbreak.

Favorite lyrics: “The mark you saw on my collarbone, the rust that grew between telephones / The lips I used to call home, so scarlet, it was maroon…”

"Anti-Hero" has Swift taking on the daunting task of examining her struggles with mental health and her inability to manage her global fame and public image, all wrapped up in an upbeat pop track! Swift uses lots of metaphors and satire throughout the song to convey the central message: her life and public/self-image has gotten out of control, leading her to a point of self-destruction, causing her to see herself as the anti-hero. In the music video Swift released with the song, two versions of Swift are seen — the private, real Taylor versus the public Taylor persona, highlighting that internal battle she’s always dealing with!

Favorite Lyrics: “I’ll stare directly at the sun but never in the mirror / It must be exhausting always rooting for the anti-hero…”

Track 4 of Midnights features the stunning vocals of both Swift and Lana Del Rey, who Swift describes as “one of the best musical artists ever” in a recent Instagram Reel, marking the first collab between the artists! In the same reel, Swift describes "Snow On The Beach" as a song about mutually falling in love with a person, and then questioning whether it’s even real because it feels like a dream, which Swift likens to “if you were to see snow falling on a beach.” Fittingly, the song has a magical, dreamy feel to it, which is heightened as Lana Del Rey sings soft, whispery vocals to back Swift!

Favorite lyrics: “I’ve never seen / Someone lit from within / Blurring out my periphery / My smile is like I won a contest…”

"You’re On Your Own, Kid" is a personal exploration of Swift’s life in all regards — growing up, love, battles with self-esteem and the harms it’s caused, and her personal relationships. In terms of romantic relationships, Swift sings of moments of yearning for someone to notice her, ultimately realizing it’s a wasted effort and leading her to the conclusion that she’s on her own. This theme of isolation continues as she sings of the sacrifices she’s had to make in terms of her career, acknowledging that, despite all her success, she’s lost so many people, once again ending up alone. The vibe of the song is much more emotional and a bit gloomy, representative of the personal struggles she opens up about in her lyrics.

Favorite lyrics: “I looked around in a blood-soaked gown / And I saw something they can’t take away…”

The 6th track takes on a pop-synth sound as Swift sings of a past relationship, ultimately ending due to conflicting wants and desires between the pair. The song delves into how Swift broke the heart of her significant other in order to pursue her music career, recognizing the self-sabotage nature of the relationship between "Sunshine" (her partner) and "Midnight Rain" (Swift). The chorus features distorted vocals, symbolizing the contrast present in that relationship!

Favorite lyrics: “My town was a wasteland / Full of cages, full of fences / Pageant queens and big pretenders…”

"Question…?" is a reflection on a past relationship that has deeply affected Swift, as she asks her past lover if their new relationship compares to the one they shared. In the song, Swift opens up about not being able to easily move on from the heartbreak and constant comparison, and continuously wonders if her ex is unable to do so as well.

Favorite lyrics: “‘Cause I don’t remember who I was / Before you painted all my nights / A color I’ve searched for since…”

This track takes on a sound and message heavily reminiscent of Swift’s 2017 album Reputation! Swift sings of seeking revenge on someone who has wronged her, backed by slow, intense vocals and beats to match the seething tone of the tale of revenge!

Favorite lyrics: “Draw the cat eye sharp enough to kill a man / You did some bad things, but I’m the worst of them...”

In this upbeat, pop-synth track, Swift decides to reclaim her well-deserved admiration and overall glimmer after her lover takes her for granted, not appreciating all the wonderful qualities she has to offer! So, to retaliate, Swift sings of going out and making the "whole place shimmer," reminding her partner that nothing can truly take away her sparkle!

Favorite lyrics: “Familiarity breeds contempt / Don’t put me in the basement / When I want the penthouse of your heart…”

The 10th track of Midnights starts with slower synths, then builds to a dreamier beat backed by Swift’s soft but low vocals, progressively rising and falling throughout the songs to match the tone switches throughout. Like the song title suggests, “Labyrinth” is all about the feeling of being so lost after a heartbreak, to then slowly — and a bit uncertainly — finding yourself back in love despite everything. The progression of the song from slower and lower pitched to a more upbeat synth-pop song is just what we’d expect from a song all about trying to navigate through a labyrinth!

Favorite lyrics: “Breathe in, breathe through, breathe deep, breathe out / I’ll be gettin’ over you my whole life…”

"Karma" takes us back to a full-on pop song, perfect to blast for dancing, getting ready to go out, or really any occasion that calls for a fun, positive vibe! In this track, Swift calls out people in the past who have deeply hurt and wronged her, especially as a young woman in music. But, lucky for Swift, karma always comes back to restore justice — in the form of her success, her loving relationship, her cats, and really all the good that surrounds her in life! So, throw it on when you feel down and it will totally lift your spirits!

Favorite lyrics: “Karma is the breeze in my hair on the weekend / Karma’s a relaxing thought / Aren’t you envious that, for you, it’s not?”

"Sweet Nothing" is a slow and sweet song all about Swift’s current relationship and all the love she feels within it, ultimately bringing her a sense of peace in a world that can be so chaotic. Throughout the track, Swift opens up about not being able to handle certain struggles the outside world throws her way; however, she’s able to escape it all and confide in her partner, and it’s all okay! The whole track is sweet to its core, and we couldn’t be happier for Swift!

Favorite lyrics: “And the voices that implore, ‘You should be doing more’ / To you, I can admit that I’m just too soft for all of it…”

The 13th and final track of Midnights concludes the album perfectly; an upbeat, electro-pop confessional of how Swift knew, from the moment she saw her current partner Joe Alwyn, that they were meant to be together, ultimately acting as a "Mastermind" behind their relationship! Following the confession, the track concludes with Swift discovering that Alwyn knew all along, which affirms her feelings for him even more! That said, we didn’t need a song to tell us Swift is a mastermind — we’ve known it all along!

Favorite lyrics: “And the touch of a hand lit the fuse / Of a chain reaction of countermoves / To assess the equation of you / Checkmate, I couldn’t lose…”

What are your favorite tracks off Midnights?