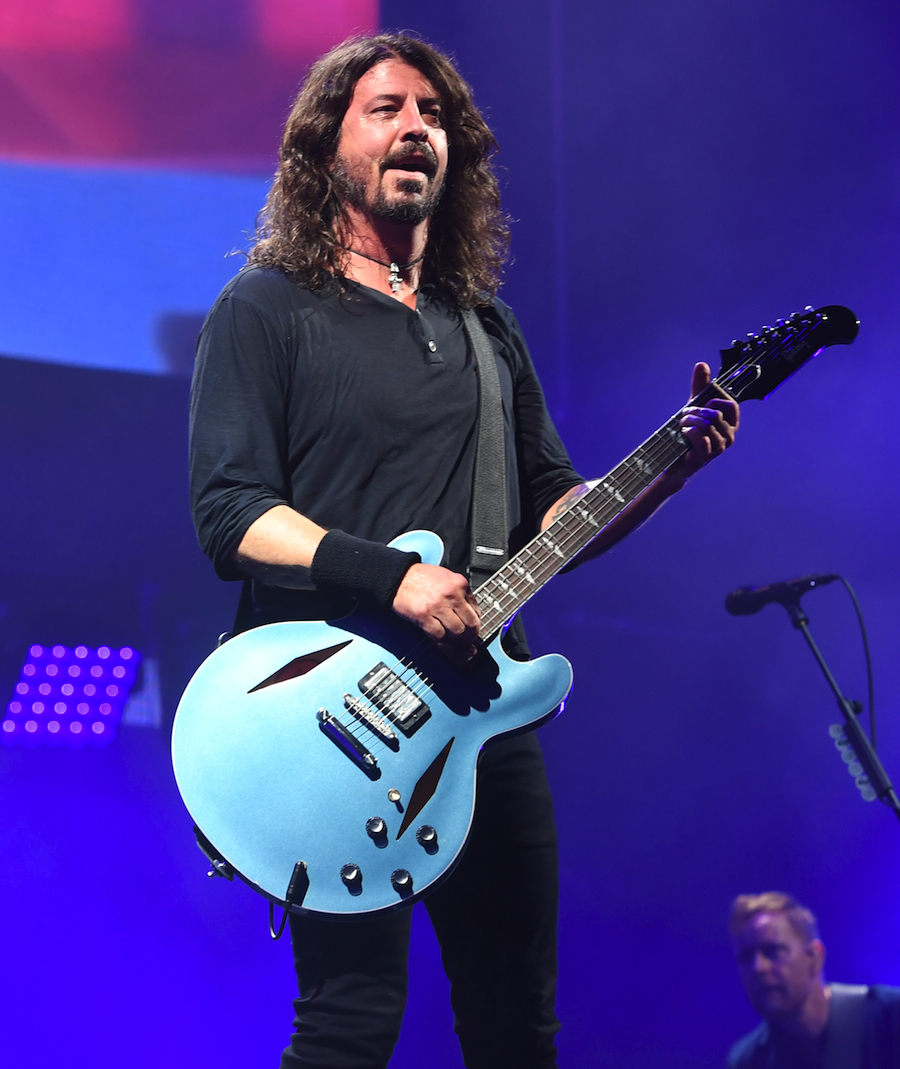 Rock music fans, rejoice! Foo Fighters are back and rocking harder than ever with their new, highly-anticipated album Concrete and Gold. The album comes three years after the release of Sonic Highways – a record that literally traveled highways to cities around the country in an effort to make the most eclectic rock album.

Concrete and Gold brings the Foos to their ninth studio album. Revered as one of the best rock music groups ever, Foo Fighters pack this album with everything we never knew we needed – exciting contributors, love songs, power ballads, blissful noises, and screaming emotions. The best Foos songs are the ones you don’t expect, the ones that keep you on your toes, the ones with lyrics so intuitive and passionate that make you question everything about yourself, and Concrete and Gold delivers tenfold. It seems like something of the past, but Foo Fighters bring the most electric, meaningful rock to us in 2017 and we must listen and take note. This is history in the making. This is Foo Fighters.

Check out a breakdown of Concrete and Gold below!

Concrete and Gold gets the ball rolling with this one-minute-and-a-half long song about a… T-shirt? Well, kind of. Despite their massive fame, I’ve always admired how grounded and levelheaded these guys are. They aren’t making music for the money and the lavish lifestyle; they’re making music because they love to make music. “T-Shirt” really pays homage to their subtle way of handling the spotlight. They’re not trying to be the kings of the world, they just want to sing songs and keep their T-shirt clean. My only complaint? I wish this song were longer, because I love it so much.

The second track was the very first single released from the album earlier this Summer, and it totally makes sense. Not to say this was the safest decision for the band to go with, but it was definitely the more traditional, expected decision for a first single. “Run” is the most Foo Fighters song there ever was. Starting in with a chill, melodic sounding Dave Grohl to hitting some hard rock instrumentals and a much angrier sounding Dave by the time the chorus kicks in; this tune is an epic Foo track. I would also like to take this time to thank Foo Fighters for teaching us all how to “Walk”, “Learn to Fly”, and now “Run”. Couldn’t do it without ‘em.

Favorite Lyrics: “Before the time runs out / There’s somewhere to run / Wake up...”

When Dave Grohl asks how you’re going to make it right – you figure it out. Upon first listen, this was my favorite on the album. It’s classic Foo’s style mixed with the tiniest hint of Justin Timberlake (ah, my little '90s *NSYNC-loving baby heart beats so fast just typing that). Yep, JT is on this number, but don’t get too excited or turned off if JT isn’t your jam – there’s nothing more than some “la-las” here and there from the former boy bander. My favorite part of this ballad is the ease that comes with singing along. The lyrics are angsty and intuitive and just hearing the guitar riffs make me feel like the most badass version of myself. This song is going to be a party when played live.

Favorite Lyrics: “Hop on the train to nowhere baby / Don’t you wanna hitch a ride? / Lights go out and your head starts spinning...”

4. “The Sky Is A Neighborhood”

As if they needed some kind of extra spunk, Foo Fighters bring in none other than the legend himself, Paul McCartney, for this track. The former Beatle can be heard drumming it out it in this grim ballad about the life and totality that encompasses the universe. It’s as if the billions of stars in the sky live in their own neighborhood and how we act down here affects it all. It’s trippy, it’s dark, but it rocks and reminds us why these guys are the best in rock music.

Favorite Lyrics: “Mind is a battlefield / All hope is gone / Trouble to the right and left / Whose side you on?”

If there are any type of psychedelic sounds on this album, they come in full force here with “La Dee Da”. Dave Grohl gives me major Steven Tyler vibes in this one. It’s something about the way the guitar makes me feel like I’m about to hear Grohl go into “Sweet Emotion” or his deep cutting screams in the chorus that channel Tyler to the fullest. Although I love me some Aerosmith and Foo Fighters on an unreal level, this song just doesn’t do it for me like the others do. The screaming and the lyricism throw me off and have me wishing for something more. That’s where the next track comes in…

Favorite Lyrics: “You can’t shame me, La Dee Da / Give or take me, how bizarre / Keep your pretty promise to yourself...”

Listening to this album for the first time led me to change my opinion on which song was my favorite about 11 times. However, having a crazy amount of listens under my belt at this point, I can confidently say that this one is my number one. Foo Fighters do loud, screaming, passionate hard rock better than anyone in the biz, but I think that there is something important to say about their slower numbers. Yes, this song kicks it up a lot around the bridge, but the beginning sounds of Dave’s soft voice and tropical vibes in the instrumentals is incredibly soothing and impressive. “Dirty Water” really shows off that these guys are men of all trades and I couldn’t love it more.

Favorite Lyrics: “I feel an earthquake coming on / I feel the metal in my bones / I’m a natural disaster / You’re the morning after all my storms...”

As much as I’d love to be the girl behind a Foo Fighters song, I can say I’m glad to not be the girl in “Arrows”. This tune is Foo Fighters' (much better) version of Ed Sheeran’s breakout hit “The A Team” – a girl caught in the crossfire between life and distress. It’s poetic and heartbreaking, just thinking of someone completely consumed by the wrongs and the fear of the world that they just don’t know any other way to live. Maybe this is where we’re headed? Maybe this is where we’re coming from? Whatever it is, I want to make sure I never have arrows in my eyes and fear where my heart should be.

Favorite Lyrics: “She had arrows in her eyes / Fear where her heart should be / War in her mind...”

Does Happy Ever After really exist? Or is it something we just keep waiting for just to realize it isn't coming? Track number eight poses these questions over and over again with the most melodic folk sound (even a little guitar sequence that, dare I say, sounds John Mayer-esque). Superheroes don’t exist; there’s always something else you’re going to pine over; even your happiest moments aren’t happy enough. A little depressing, or maybe a wake up call for all of us to start seeing the beauty in each day, each moment? Whichever it is, I appreciate this call out from FF.

Favorite Lyrics: “Cracks in the floorboards are deep from dancing / To the sound of candles burning out...”

Each Foos album needs a song with Taylor Hawkins on the lead vocals. Although I have an obvious bias toward Dave’s vocals, I can always dig the little mix up when Taylor’s voice starts echoing out of the speakers. I can 100% get behind the lyrics of this song. “Sunday Rain” – when you wake up back from your weekend high, all of the fun and games are over and you’re on your way back to reality. Taylor wants this far away from him. Leave the crying and regret for someone else, because it is not welcome here. This track goes to the top of my favorite Hawkins’s sung songs for sure and that’s even including one of my all time favorites “Cold Day in the Sun”.

Favorite Lyrics: “You tell a lie, you should keep it / Don’t wanna know where it’s leading / Don’t wanna follow you ‘round / My first mistake was believing...”

Best lyrics on the album? This track takes the cake. “The Line” is passionate and honest and everything I imagine a Foo Fighters song to sound like. The tune makes everything worth it – the fight for what you want, the tears shed on the way there, the failure, picking yourself back up, all of it. Everything is on the line and that’s the way we have to live our lives, because if we don’t, what’s the point? Dave Grohl and the rest of FF really show off their chops and musicianship like most of their best songs do, but here, it’s different. It’s magical and inspirational. I’m obsessed.

Favorite Lyrics: “The tears in your eyes / Someday will dry / We fight for our lives / 'Cause everything’s on the line...”

The title track rings in last on the album, but not in quality. “Concrete and Gold” really ties the album together with a haunting slow ballad. FF, with the help of Boyz II Men’s Shawn Stockman, tells a story of a stretching relationship, one that from the outside looks like it just might not make it, but with gold-like tendencies and roots stronger than concrete, it’s impossible to let go of something so spectacular. Could this be the portrayal of a love interest, a relationship with a friend or family member, maybe with their fanbase? We don’t know, but what we do know is that Foo Fighters are gold. And this album? Even more gold.

Favorite Lyrics: “Our roots are stronger than you know / Up through the concrete they will grow...”

Concrete and Gold is available wherever you get your music and has proven to be especially good for carpool sing-alongs, shower concerts, intense cardio, head-banging, and jumping around. Happy jamming!

Want more? Check out a making of the album narrated by Dave Grohl here!