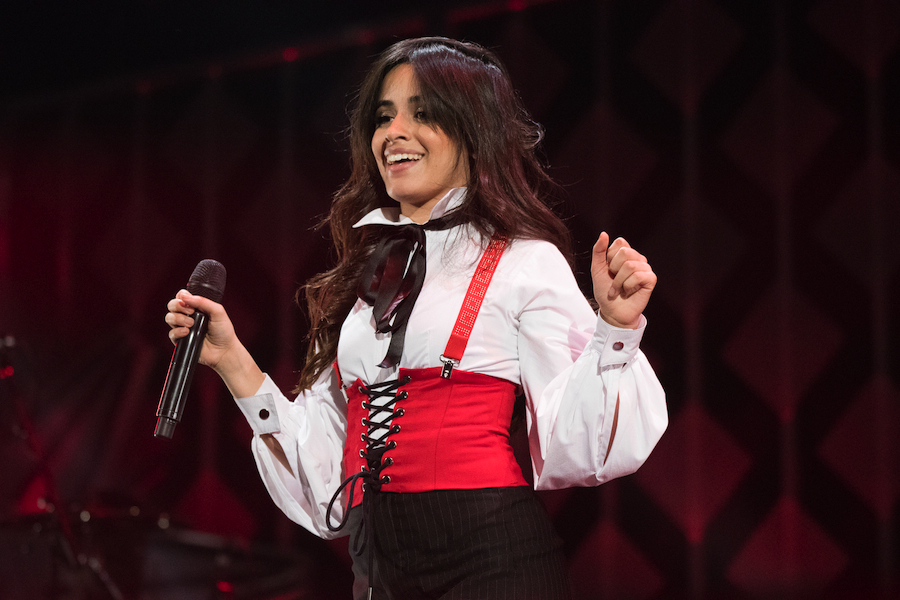 One of the newest female solo artists just recently dropped her debut album and we are living! Camila Cabello leftFifth Harmony a little over a year ago, and her solo debut, Camila, is definitely an accomplishment for the “Havana” singer, and we couldn’t be more excited for her! Although we have heard Cabello sing solo before on collaborations with Shawn Mendes and Machine Gun Kelly, this is her first huge project completely solo aside from her first single “Crying in the Club”. Camilamakes up a total of 10 pop songs with a flavor of her own Cuban roots and expresses her true identity through her music.

Check out this track by track breakdown of Camila down below!

This is the first song on the album, which she just recently debuted it on Jimmy Fallon’s “The Tonight Show”, and it definitely sets an amazing vibe. In the song she sings about feeling everything that you feel when you’re with someone, really representing what it's like to be captivated by someone, and feeling the emotions that come over you when you’re with that special someone, knowing that you’ll never be the same after falling for them.

Favorite Lyric: “And I could try to run but it would be useless / You’re to blame...”

"All These Years” is a very heartfelt song, describing the feeling of seeing someone after a long period of time, and suddenly all those emotions that you had once felt for this particular person are stirred up again. She sings, “...And I never prepared for a moment like that / Yeah suddenly it all came back, it all came back...” And later, “I never told you / I should’ve told you”. Oh those pangs of regret and wishing that someone knew how you really felt... #Relatable

Favorite Lyric: “And you probably will never know / You’re still the one I’m after all these years...”

“It was at a time in my life where I loved having control - creatively, control of my life, my decisions, control of my time… It could be about whatever you want it to be, but for me that’s kind of where it stems from,” says Camila on the making of the song, which really expresses the feeling of being in charge of oneself, and knowing what you want. In any aspects of life, it is important to understand who you are. This really gives off true Girlboss vibes and allows Cabello to shine through in her music, knowing that she has full control over what she is creating.

Favorite Lyric:“No, she doesn’t go to the bar / Too mnay lovers she’s scared and they want her back...”

No doubt you've probably heard this one before! "Havana" is the first single released off this album and it’s blown up on radio stations everywhere! This song harkens back to Cabello’s roots, since she is from Cuba, and speaks about falling in love in Havana but having to leave that person. As the lyrics say, “my heart is in Havana,” meaning that she left everything she felt for this guy where she first met him.

Favorite Lyric: “I knew him forever in a minute...”

This song really makes you want to dance with the amazing piano intro at the beginning of the song. She sings about loving someone “inside out” and really getting to know everything about them, from the inside out. Leading into the ending of the song she once again goes back to her roots, singing in Spanish. This song is definitely upbeat and very fun!

Favorite Lyric: “Look on the bright side / You’re on the right side...”

Slowing things down a bit, “Consequences” is definitely the most stripped down song that made it onto the album. This is where Cabello really allows herself to open up about her feelings and show what it is like to go through something so tough, such as a break up. At the beginning of the song, she sings the words that describe the way she truly felt, “Secret keeping, stop the bleeding / Lost a little weight because I wasn’t eating...” She goes on, “loving you was young and wild and free...” Then, at the end of the song, she comes to the conclusion, “loving you was dumb, dark, and cheap...” These lyrics could relate to anyone and brings out some serious feels.

Favorite Lyric: “Loving you was sunshine / But then it poured and I lost so much more than my sense...”

This track could definitely resonate with a lot of teenagers out there who are really just trying to find their way as it speaks about meeting new people and thinking that they are your friends but then eventually getting let down by the way that they treat you. The guitar melody in the background really brings the whole song together with a great vibe that is slightly different from the rest of the album, but definitely fits.

Favorite Lyric: “Can I run away to somewhere beautiful where nobody knows my name?”

This song starts off with another amazing piano melody, and once again tells a great story, expressing the emotions of knowing that a relationship is not going anywhere and eventually turns one-sided with lyrics like “all I do is give, and all you do is take...” She goes on to sing, “no reason to stay is a good reason to go...” which is good advice to anyone stuck in a bad relationship.

This song could also resonate with many people hoping to learn more about a certain someone that you are infatuated with. These particular lyrics brings the song together: “Who are you when it’s 3AM and you’re all alone / And L.A. doesn’t feel like home?”. This part shows that life is all about getting to know the real person and not this facade that they put on for other people. Getting to know someone as a genuine human being and sharing moments with them is important, rather than knowing what they only want people to know about them.

Ending the whole album, this song brings out the dancing vibes once again! This song has a fantastic pop electronic sound to it. It truly represents a relationship with someone where all you want to do is have fun. The lyrics “whatever trouble that you’re thinking / I could get into it” really represent being in a carefree relationship and just having fun with that special someone.

Favorite Lyrics: “I’m sick on you, sick on you / But you’re the medicine too”

With Camila Cabello being freshly new to her solo career, this album absolutely killed it. It hit number 1 on the iTunes charts in over 100 countries, kicking off her post-5H career with a bang!