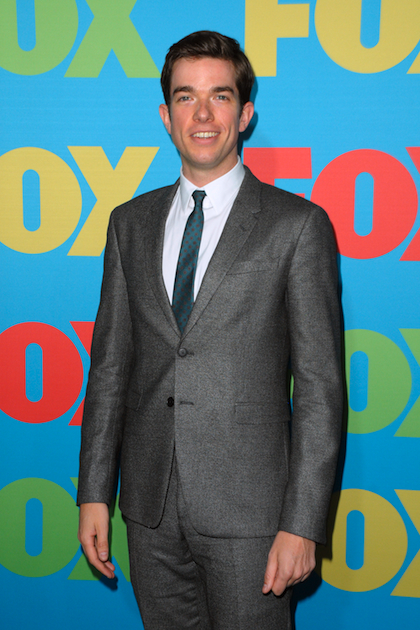 Last week, I gave you the lowdown on my 5 of my top picks for the best new shows coming to the 2014-'15 TV season. I couldn’t just stop at five, though, and as the networks have announced new shows, I have picked another 5 for you to get excited about. As we bid farewell to some great old shows, it’s time to say hello to some promising new ones!

1. “Mulaney” (Fox): It’s taken a while for “Mulaney” to finally find a home at Fox. The show was first shown to NBC last year, and after they declined, Fox picked it up. “Mulaney” follows stand-up comic John Mulaney (played by -- wait for it -- John Mulaney) as he comes off age under his boss, roommates, and neighbors. In addition to the hilarious Mulaney, the show boasts some true star power, including Martin Short, Nasim Pedrad, and Lorne Michaels on the creative team. Considering the success of shows like "Seinfeld" and “Louie”, I think we’re due for another great sitcom about an oddball comedian.

2. “Galavant” (ABC): I’ll admit that ABC’s “Once Upon a Time” is completely and utterly insane (this season included the Wicked Witch of the West being related to the Evil Queen and attempting to time travel), but it can also offer an interesting take on fairy tales (such as the evil Peter Pan seen earlier in the season). I’m curious to see what ABC will do with “Galavant”, which is a musical fairy tale centering on Prince Galavant (his actual name) as he sets out on a quest for revenge against those who stole his one true love. The musical part of the show is what really intrigues me, as, unlike "Glee", it appears that the songs will be original and not sweeping covers of Top 40 hits. Check out some samples in the trailer below!

3. “Gotham” (Fox): It looks as though next year will be the year that DC Comics takes over the networks. “Gotham” appears to be one of the most promising of the DC-based shows, and focuses on the sinister city, which is home to Batman, Catwoman, the Joker, and all the other fun-loving villains (and a few heroes). In particular, “Gotham” will explore the origin stories of Commissioner Gordon and the evil minds of Gotham. I’d like to see “Gotham” tackle some of Batman’s lesser known villains, as well as the infamous baddies.

4. “The McCarthys” (CBS): Having spent a bit of time with Bostonians, I have developed a bit of a fascination with Boston. While Angelinos tend to be a bit more reserved, Bostonians are our polar opposite; the ones that I have met are loud, fun-loving, and delightfully sharp tongued. “The McCarthys” focuses on a sports-loving Bostonian family that is turned upside down when the athletically-challenged son (Tyler Ritter) comes out. His family is not upset by this fact -- they are more upset by his wanting to leave them. In order to keep him around, his father (Jack McGee) enlists him as his assistant high school basketball coach, and hilarious hijinks ensue. Shows set in Boston just seem to work well (“Cheers”, anyone?) as well as ridiculous families, so I have high hopes for “The McCarthys”. (I have also never understood the sports fans of Boston, so I am hoping that this show will clarify that culture for me.)

5. “Jane the Virgin” (CW): I’m really not sure what to think of “Jane the Virgin”, which is why I am intrigued by it. Based off of a Venezuelan telenovela (so you know it’s bound to be nuts), “Jane the Virgin” follows Jane (Gina Rodriguez), a hard-working sweetie who is accidentally artificially inseminated. If that’s not mad enough, a series of surprising events follows. I’m a sucker for telenovelas, and sometimes they do work well as American shows (such as “Ugly Betty”), so I have hope for “Jane the Virgin”. Not to mention the premise is just so absurd I have to tune in.

Which shows are you looking forward to seeing next year?