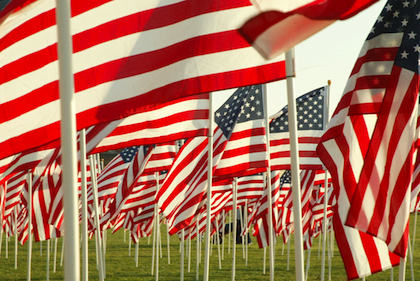 Sure, the 4th of July is still 4 months off, but it's never too early to start showing your patriotic colors!. And thanks to some recent music industry happenings, we’ve decided to praise songs about America the Beautiful!

This past week, Rihanna debuted her newest song, “American Oxygen” at the March Madness Music Festival in Indianapolis, Indiana, and it sparked some serious interest! The lyrics are about patriotism, resilience, and achieving the American Dream. If you want to watch the official music video, you’ll have to sign up (and pay) for Tidal, but in honor of this nationalistic jam, we’ve decided to make a list of the top five patriotic songs!

"I will always do my duty, no matter what the price / I've counted up the cost, I know the sacrifice / Oh, and I don't wanna die for you, but if dyin''s asked of me / I'll bear that cross with honor, 'cause freedom don't come free"

I think it's safe to say that this is, was, and will remain the standard to which all singers of the National Anthem aspire.