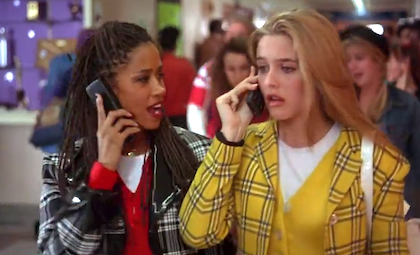 This past weekend on SNL, guest host Michael Keaton gave us a blast from the past with an SNL short that was not only hilarious but very nostalgic. Here is “Prom Queen” from SNL:

Remind you of a certain '90s teen rom-com? Yes. She’s All That. Oh the memories. The '90s were a wonderful decade of sassy, edgy, and even a little angsty teen movies.

The '80s brought a surge of teenage romantic comedies. From Sixteen Candles and Say Anything to The Breakfast Club andCan’t Buy Me Love, the '80s pioneered a genre that later years could only try its best to emulate. As a '90s Baby, however, I must stand up for the classics of my time and point how the '90s brought a fresh, new “cool-ness” factor to teenage rom-coms. Here are a few of my favorites I’d like to share with you all, starting with the very movie SNL parodied this past weekend:

This movie is about the typical high-school jock who makes a bet with his friends that he can make the most unlikely girl at school the prom queen. Freddie Prinze Jr. stars , but this film is chock full of many actors before they became certifiable stars, like Paul Walker, Gabrielle Union, Dulé Hill, and even Usher!

Drew Barrymore stars as a journalist who goes back to school to do research for an article and finds that her second chance at high school might just land her a spot at the popular table. This movie also features a ton of celebrities in it before they became big, including James Franco and Jessica Alba. Try to spot them in the trailer!

A list of classic teen films from the '90s that doesn't include Clueless? AS IF! In this film, Cher, a popular Beverly Hills high-schooler, whose life is centered around shopping and her social life, attempts to integrate the slovenly new girl in school into the in-crowd, with mixed results. This film is loosely based on Jane Austen’s novel Emma and takes a look at “how the other half lives” -- maybe underneath their superficial and materialistic selves, they are just like us! Well, at least Cher might be anyway...

Melissa Joan Hart stars in this film about a popular girl who needs a date for her school dance and she finds that her only option is her neighbor, who wants to find a way to make his ex-girlfriend jealous. Their mutual needs and crazy plan may take a turn that neither of them could have anticipated. And, yes, the title does refer to Britney Spears’s hit song of the time. The film also stars "Entourage" leading man Adrian Grenier.

Probably one of my favorite movies ever, 10 Things I Hate About You is a loosely based on Shakespeare’s Taming of the Shrew and is another story centered around bets and dating in high school. The film stars Julia Styles as the tempestuous Kat, and the late Heath Ledger as the man tasked with taming her so that Joseph Gordon-Levitt can date her sister, Bianca. It's complicated.

The beginning of the notorious American Pie franchise that cemented the teenage sex romp movie genre. The story revolves around four high school seniors looking to get some action before they graduate.

Its funny to think that we're a whole decade-and-a-half removed from the '90s and yet I feel like these films just came out a few years ago. I grew up watching these films and they will always have a special place in my heart even if they don’t really hold too much deep meaning. I know what I’ll be binge-watching this weekend!

What are some of YOUR favorite teen comedies from the '90s?