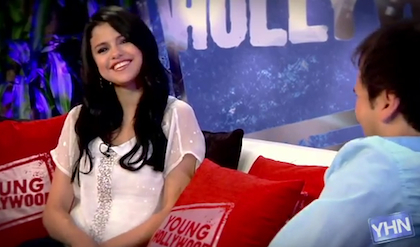 At approximately 7:34pm PDT last night, I finally got Selena Gomez’s “Love You Like a Love Song” out of my head, after being on a continual cerebral loop for about three weeks.
Then, this morning I remembered that we interviewed her at Studio, and lo, she is the subject of this week’s episode of POWER PLAYERS. And like a jukebox that momentarily lost power, the gentle whirr of the vinyl record in my head starts spinning once more, and it keeps REPEAT-PEAT-PEAT-PEAT-PEAT-PEATING!!!
Fortunately, it’s a cute song, and Selena Gomez herself transcends cuteness. She’s like a cartoon artist’s concept of cute – it’s almost unreal. But as babyfaced as she may be, she has the voice and the carriage of a full-grown woman, and I dig that dichotomy. She’s also on the road to being a bona fide brand, expanding from the narrow role of Disney Darling into a multi-talented force to be reckoned with. When she came by the Studio, she brought with her a sample of one of her latest ventures – her new self-named perfume. She also comes armed with some simple but very profound advice for other youngsters out there who are dreaming big: BE NICE. It’s as easy as that, and it works wonders. Look how far it’s gotten Selena Gomez.
Check out our interview with Selena below!
- Katie Marzullo, YH Staff Editor
[email protected]