New on YHN: Catching Up with Fellow YouTubers Michelle Phan and Felicia Day! 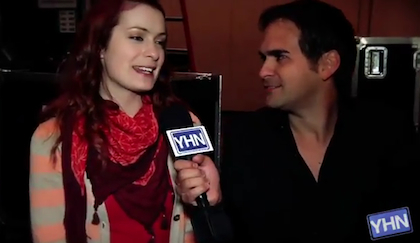 As you probably know, YH was not the only creative media outlet bestowed an exclusive channel by the magnanimous YouTube gods. In fact, several Internet luminaries with distinct online presences partnered up with the video giant as well, and since we’re all playing for the same amazing, groundbreaking team, we’ve made an effort to get to know our neighbors, so to speak.
Last week, I told you about our CELEBRITY TREND REPORT episode with beauty vloggers Elle & Blair, who not only have their own channel but their own reality series competition! Today, we have two more YouTube stars to introduce you to – Michelle Phan and Felicia Day!
If you subscribe to Elle & Blair, then you’re probably also familiar with Michelle Phan – if not, hit up her channel to get up to speed and enjoy more awesome make-up tutorials from an artist's perspective. Her new channel, Fawn, has a bevy of beauty-related shows. Michelle’s influence is so far-reaching, Lancôme hired her to be their spokeswoman! Whoa!
Taking a slightly different tack is Felicia Day, whose vlog on geek culture also led to her partnership with YouTube for her channel Geek & Sundry, which is sure to tickle the fancy of your inner and outer fangirl/boy! Featuring shows like “Written By a Kid” (exactly what it sounds like), “Sword & Laser” (where she interviews comic book celebs), and Dark Horse Motion Comics (where comic book are brought to life with animation), there is plenty of content to geek out to!
- Katie Marzullo, YH Staff Editor
[email protected]