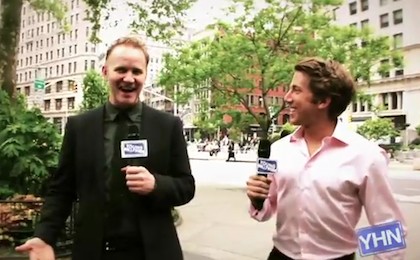 If it seems like we interview Morgan Spurlock A LOT, it’s for a very good reason – the man is infinitely fascinating.

Personally, I love anyone who always makes me feel like I am learning something new whenever I talk to them. In Morgan’s case, anything out of his mouth contains little pearls of wisdom or factoids. He has an uncanny ability to get you thinking about ordinary things in a new way, without making you feel like you're being lectured to. I totes wish his series “30 Days” was still on the air, because not only did I learn something new, but so did the (oftentimes) narrow-minded people who were featured on each episode.

Spurlock’s latest attempt to expand our minds is his latest documentary, Mansome, which is a tongue-in-cheek look at how our society views ideas of masculinity and handsomeness, and how it’s evolved over time… for better and for worse. “What Makes a Man?” is the question Morgan asks. Actually, the question is asked by Will Arnett and Jason Bateman whilst sitting in a bubble bath together with facial masks on. Now THAT is sexy.

Inspired by the two comedic actors, Morgan took the question and ran with it… all the way to Tribeca! That’s where we caught up with him to hear his thoughts on the concept of being “mansome” (manly + handsome) and what defines a member of the male gender thusly.  Personally, I find BALANCE to be the key to ultimate mansomeness. Confident but humble, manly but feminine, strong but sensitive, ambitious but considerate, clean-cut but rugged, three-piece suit but with guyliner… Basically, Chris Hemsworth.

Check out our chat with Morgan Spurlock below, followed by the trailer for Mansome.

Mansome opens in limited release this Friday, May 18.

How do YOU define “mansome”?