To Serial Killing to Killing It in Drag: Michael C. Hall to Take Over "Hedwig"! 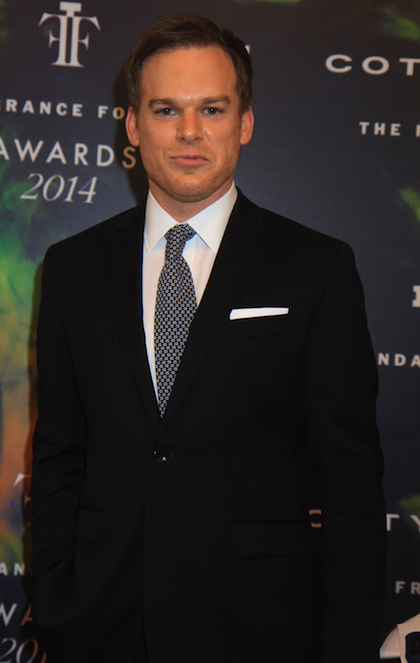 Over the years, Michael C. Hall has played some rather strange roles. We first got to know Hall as David Fisher, one of the co-owners of the Fisher and Sons Funeral Home, on “Six Feet Under”. Fisher was a despondent, reserved, gay funeral director who frequently butted heads with his older brother and attempted to keep his relationship with handsome police officer Keith from unraveling. Hall’s next great role (and probably his most well-known) was as Dexter on Showtime's “Dexter”, a forensic analyst who also happens to be a serial killer, specializing in only killing other killers. Despite the uneven writing on both shows, Hall remained a constant -- his ability to bring both characters to life is an impressive feat.

Hall's next big groundbreaking role is a bit more... fabulous? Hall is slated to don a mini-skirt and a fierce feathered blonde wig as the German singing chauntese Hedwig, in the Broadway production of Hedwig and the Angry Inch, starting on October 16 through January 4. Hall will take over the role from “Girls” star Andrew Rannells, who in turn took over for Neil Patrick Harris. It seems like this role was just MADE for popular television actors!

This isn’t Hall’s first time singing on stage, though. He played the pale-faced Emcee in Cabaret, a part he played almost 500 times. Although the Emcee isn’t quite as outrageous as Hedwig, he’s certainly an unusual character and a step in the right direction.

It will be interesting to see Hall step into such a different role from the stone-faced Dexter.  If I lived in New York, I would certainly be inclined to see Hall step into those tall boots and belt out “Sugar Daddy”. Alas, I will have to hope that someone sneaks in a phone and records some of his performance. I’m sure it will be no less impressive than his other roles!

Are you curious to see Michael C. Hall star as Hedwig?

In the meantime, check out the decidedly reserved Hall's visit to the YH Studio with his Kill Your Darlings castmates!