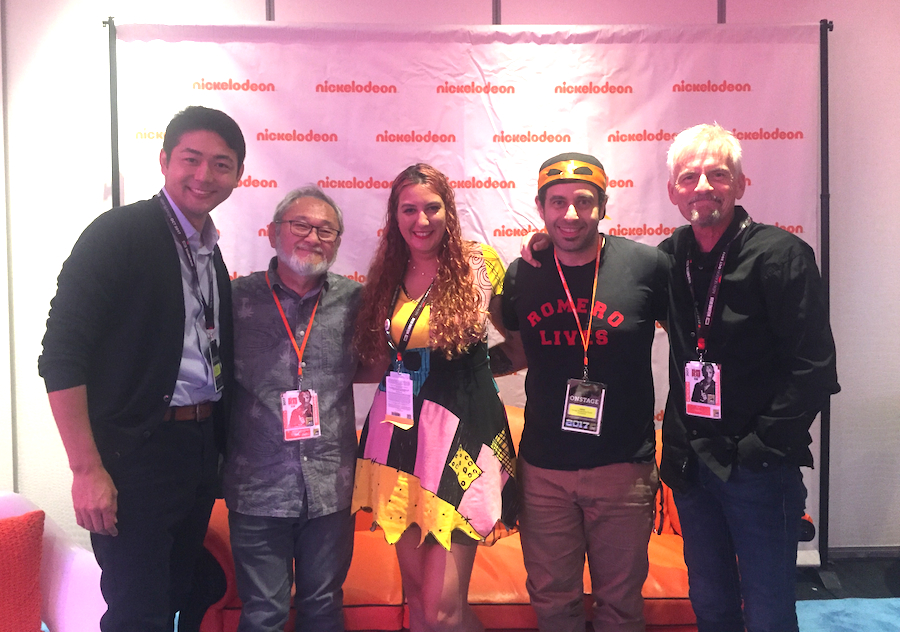 During Comic-Con, some of the cast of Nickelodeon’s “Teenage Mutant Ninja Turtles” took a break from screaming fans to have a chat. Currently in its fifth season, the turtles have been up to quite a bit of crime fighting and are about to join forces with a new hero -- Usagi Yojimbo, a rabbit samurai who was first conceived during the 1980s. Check him out!

Created by Stan Sakai, Usagi answers to no master and wanders the land helping where he can. As the ninja turtles return for the second half of Season 5, they will cross paths with Usagi. The voice of Donatello, Rob Paulsen, executive producer and creator of Usagi Stan Sakai, Ciro Nieli, and voice of Usagi, Yuki Matsuzaki, filled me in on this new development!

CN: Season 5 is basically where we took a departure from the regular show, and we actually even changed the show’s title a little bit. It’s a subtitle: “Tales of the Teenage Mutant Ninja Turtles”. The idea was to stretch and do stories beyond the normal arcs we’ve been telling. It’s almost like an anthology series. We see a lot of different stuff. We had invaders from space. We have secret cults that have tried to make the past Shredder rise from the dead. We met a lone ronin rabbit. We’re all over the place. We even have a special episode that shows us an early day of the turtles as babies as they were first mutated.

YH: Rob, How do you personally relate to Donatello?

RP: Well, I relate to him because I’ve had the good fortune of being involved with the turtles since 1987. I was Donatello before you were born. I relate to turtles on a personal level because it’s been a part of my life for 30 years. Having been there when people like Ciro were growing up with that show, and then being involved in this one is kind of surreal. This is the fifth year that Ciro and I and the Nick folks have been talking about this show. It’s become a success. I think that’s a real testament to [co-creators] Kevin Eastman and Peter Laird, but also to Ciro and his team, who took it to the most honest iteration of the show, because these guys get the total mythology and ethos of Ninja Turtles. It’s a very personal thing for me.

YH: Ciro and Stan, how did you go about combining the Ninja Turtles and Usagi?

CN: Do you remember how you were initially contacted? Because first, I would guess, it was through lawyers and there’s that whole dance…[RP laughs] and I wasn’t apart of that...

SS: Before that, Usagi and the turtles started off around the same time, since 1984. I’ve been doing Usagi for over 30 years now. We’ve crossed over a number of times now, in the comics and in their previous incarnations on television. When this series came about, they wanted to put Usagi in again. As Ciro said, first we had to go through lawyers, and everything got straightened out, and then the creative team took over. The three-episode story arc with Usagi is just fantastic. I saw the first episode a few nights ago and I was blown away. I just thought, “This is my work on screen!”

CN: I was a little nervous. I’ve worked on a lot of licensed properties and big brands, and the one thing they ask me is, “Are you a little nervous?” And I try to never let nerves bother me. With "Turtles", I got that a lot, but I’m used to it because I’ve been doing it for almost eight years now. I’ll be very honest, when Usagi came up, I think I got a little nervous. It was like I was married to Kevin in a way. He had approved, and I could do no wrong. But here came another person that I had to impress. I had to tread lightly at first. We started first with story. I picked a lot of Japanese folklore stories. The foundation actually came from a common Japanese story for children called Kotaro. My partner, Brian, and I pitched it to Stan and he loved it. From there, it was the natural progression. I got very excited and drew as much as I could. I looked at like 4,000 Stan drawing pages. My dining room table was covered with Usagi books for a period of three months. I think I just put the books away a few weeks ago. It’s a bit daunting. I went very classic with the storytelling. It was awesome. Stan’s been great.

SS: Thank you. I was so impressed. There’s a five-minute horseback riding/fight scene. It was so action-packed and imaginative. I was impressed with that.

CN: We have so many brilliant people on the crew. We have this guy, who you don’t really notice because he’s very quiet and always smiling. His name is Adam Lucas and he came back with that horse chase and all of our jaws dropped. It was remarkable.

YH: Yuki, as the voice of Usagi, why does he become close to Leonardo?

YM: I think because Leonardo understands the code of samurai. At first -- and I can’t say much -- Usagi and Leonardo were not friends. But through the course of their actions, Usagi realizes that Leonardo is a samurai as well, albeit a ninja. He understands the samurai and the culture. He knows how to respect people. Usagi understands that, and that’s why they get along.

YH: Since the ninja turtles are known for their love of pizza, what is your favorite pizza?

RP: Mine is hot fudge, marshmallows, tuna fish, and doritos. I’m a Ninja Turtle. I’m a talking turtle, so that would suggest that nothing is off limits. No, I’m just kidding, it’s actually canadian bacon and green peppers... Here’s what’s so charming about this whole story. Ciro grew up in Philadelphia, and his father owned a pizza parlor. He would draw the turtles on the pizza boxes.

CN: I have stacks of pizza menus and guest checks where the backs are covered in ninja turtle drawings.

RP: It was written in the stars that he should run the show someday.

SS: Mine is boring. I like sausage, mushrooms, maybe some basil.

YM: I don’t want to disturb you guys, but since I’m Japanese, I like corn, mayonnaise, shrimp pizza... Speaking of pizza, the first time I saw "Ninja Turtles" was when I was 12 years old in Japan. I went over to my friend’s house and he had the Sega Genesis, and we were playing the "Turtle" game. The item to replenish your life in the game is this pizza. But it’s just this huge box. I thought, “What is that? Why do they get their health when they take the box?” And my friend said, “It says 'pizza' on it!” And I thought, “The pizza can’t be that big!”

CN: Well, the turtles are big. They gotta eat a lot.

“TMNT” airs on Sundays at 9am on Nickelodeon! Be sure to keep up with the Turtles on Twitter.