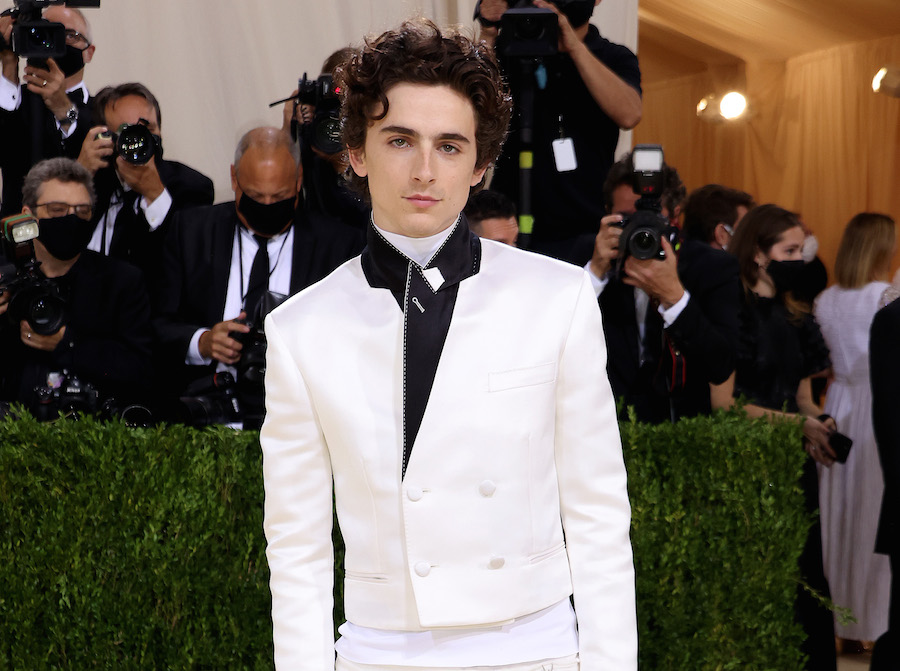 Historically speaking, men’s looks on the red carpet have always been, well, traditional. Or, let's face it, boring. Whichever word suits your fancy! Even though the traditional route never fails to look sleek and appropriate, sometimes it’s fun to think outside the box. Lucky for us, the trend of men sticking with the traditional tuxedo or the typical black/navy/gray suit is one that is declining. We want to take a moment to applaud those daring and expressive red carpet icons who have popped in every now and then to leave their mark in the fashion world, keeping us fellow red carpet fiends intrigued. And one recent influential individual we would like to honorably mention is none other than Timothée Chalamet!

After the rough year we just had, one that excluded glitzy red carpets and juicy celebrity sightings, it’s no shock that Timmy is coming back hotter than ever. As is our fangirling. The drought is nearing an end, people! Arguably the most “it” actor over the past couple years, Timmy is certainly a hot commodity when it comes to the big screen.

Most recently, he rebounded onto the red carpet scene at the Cannes Film Festival and the Venice Film Festival, celebrating the premieres of Wes Anderson’s The French Dispatch and Denis Villeneuve’s Dune, respectively. To the former, he wore an eye-catching, shiny silver Tom Ford suit.

And to the latter, he wore an even more dazzling Haider Ackermann fit with a dramatic shouldered top and pants covered in black crystals. To finish the looks, as usual, they were accompanied by Cartier rings and bracelets, as well as a vintage brooch attached to the sleeve. Ah yes, that trademark sprinkle of Timmy magic.

And let’s not forget about the Dune Paris premiere, where he and Zendaya arrived looking more powerful than ever. Come on, who else could pull off an all denim suit this magnificently? Justin Timberlake could never. No, like, literally, he wore a Tom Ford blue denim tuxedo paired with satin panels, his customary rings, and his majestically wild curls.

And let’s talk about his Met Gala look some more, shall we? Did someone say "Zoom Culture Chic"?! He has singlehandedly reformed men’s fashion into something so much more modern, expressive, and chill. It’s the work of legends, or Met Fala co-chairs! Off-white converse and sweats on bottom, and an all-white ensemble by Haider Ackermann on top. Impeccable and jaw-dropping, as always.

We can’t wait to see how else he will sparkle up the red carpets to come. More Timmy content, please!