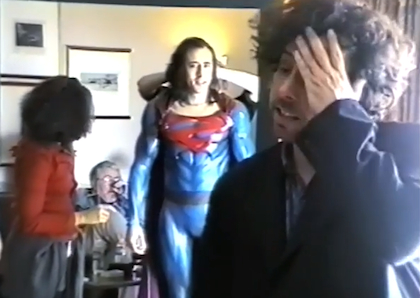 Over the weekend, a tiny little convention took place in San Diego in which comic books, movies, comic-book movies, video games, video game movies, and soup recipes were discussed to an extant that might appear to be unhealthy to those that don’t inherently know that The Wonder Twins aren’t actually official members of the Justice League. News about what went on there has officially infiltrated every corner of our reality, including that quaint little Candle Shop in Maine where you got that really nice scented candle for your folks. Yup, even they won’t shut up about how cool Ben Affleck looks in his armored Batman suit and how angry-looking Superman looks while hovering over the Bat Signal.

Well, I can happily say that I am not here to talk about any of that. Well... Iam here to talk about Superman, but not about his upcoming slug-fest with Batman. I’m here to talk about another Superman movie that you might not have heard of: Superman Lives. Imagine, if you will, a Superman movie directed by Tim Burton, written by Kevin Smith, and starring Nicolas Cage. Now let's go a step further and imagine that film containing things like Superman fighting a giant spider, Lois Lane beating up Lex Luthor on national television, and a long-haired Kal-El who doesn’t fly but does sport a nifty sparkly suit. Well, sadly, imagine is all you can really do, because that awesome-sounding movie was never made. Back in the '90s, Superman Lives was an actual project that had been green-lit by Hollywood and one that would ultimately disintegrate under the weight of its own mad genius and a smorgasbord of production problems. Now, I am not exactly the go-to guy for information regarding the harrowing journey that was undertaken to bring Superman back to life in the '90s, but I’d like to introduce you to a man who is.

Jon Schnepp is in the process of creating a pretty spiffy looking documentary called The Death of Superman Lives; What Happened that will surely shed some light as to why a Nic Cage Superman movie never saw the light of day. It features in-depth conversations with the likes of Burton, Smith, and many others that were involved with this project-of-the-damned. You’ll get to see the costumes that were designed for the film (3-time Oscar-winning costume designer Colleen Atwood), the storyboards, and a snippet or two of some actual test footage from the film itself. If you’re like me, then you can’t wait for this documentary to make it’s debut on the world’s stage, but before that can happen, Mr. Schnepp needs a bit of help. No, he’s not looking for volunteers to play the giant spider or Superman’s hair for that matter. No, what Mr. Schnepp needs is some good old-fashioned finishing funds for his awesome project. Go to this link and allow Mr. Schnepp to explain just what he intends to do with all of the gold doubloons that you plan on sending him.

Oh, and peep the awesome trailer below if you’re still not convinced that this man’s dream should be allowed to leap tall buildings in a single bound.