There's a New Doctor in the House! 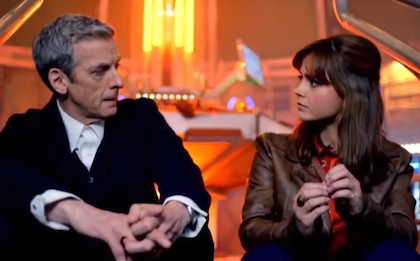 Whovians, rejoice! The 8-month drought without a man in a blue box taking us on journeys through time and space is finally over. Arguably the most established actor to ever operate the Tardis, Peter Capaldi  ,  finally made his debut as the twelfth and newest Doctor on BBC’s “Doctor Who”, taking over after Matt Smith’s 3-season run. Capaldi started his service as the Doctor by already setting the stage for a much darker season than past Doctors like Smith and David Tennant.

Capaldi made his first starring appearance as the Doctor this past weekend in the Season 8 premiere entitled “Deep Breath”, which was written by “Doctor Who” show runner and Emmy-winning “Sherlock” scribeSteven Moffat. The episode is 76 minutes long and deals with, among many things, a Tyrannosaurus Rex set loose in the Victorian England city of Thames. The episode pretty much starts off with the Doctor and his companion Clara (Jenna Coleman) swallowed by the dinosaur. Things take off from there as the discovery of an ancient time-lost robot named the Half Face Man (honestly he has more than half a face) and his crew rebuilding underneath the city for millions of years. Slowly they have been rebuilding their clockwork bodies by harvesting organic parts from unwilling human donors… basically life in Victorian England. Moffat neatly works the robots into the mythology of an older fan favorite script he wrote before he ran the show entitled “The Girl in the Fire Place” from 2006. How does he do it? Watch to find out or read what I just wrote much more closely.

Despite all the trailers pointing towards much darker things ahead, Capaldi’s Doctor still produces some comedy with the confusion and frustration that comes with his new body. For starters, the twelfth Doctor has a real issue with being Scottish, finding the accent to be unsavory. He also makes it a point to say he isn’t a fan of his eyebrows, stating, "These are attack eyebrows! You can take bottle tops off with these!"

Even with some humorous moments with the Doctor initially coming to grips with his new identity, he still definitely proves to be a darker Doctor as he wrestles existentially with if he is a good person or not. To me, it feels like a good change. Doctor Who is like the James Bond of television; every now and then you have to shake things up with a new actor. Personally, I’ve never had an issue with a new Doctor and love the fact the show changes a bit each time our time traveling mad man regenerates his body. According to some tweets, though, there are fans out there that just aren’t jiving with the show’s new set-up. That’s totally fine. I’ve been a Whovian for quite some time, and I have to say that it feels like whenever there’s a new Doctor, and in some cases a new companion, people react negatively at first and say they prefer more of the old. After a while, they come around, because, let’s be real, it’s Doctor Who -- his life is never set and steady, so with time, he’s always changing.

What did YOU think of the season premiere of "Doctor Who"?