"The X Files": My Struggle 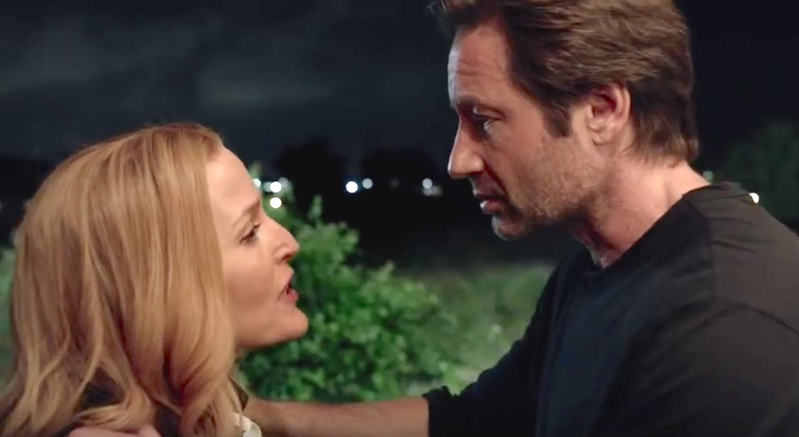 I’m such big fan of “The X Files” -- and alien conspiracies in general -- so naturally I’ve been ecstatic and patiently awaiting the new “The X Files” revival miniseries. So Sunday night, when it premiered at 7PM, my roommate wanted to watch an episode of “Arrow” he recorded sometime ago. That’s quite alright as I was busy working on some writing still, would prefer to fast forward through the commercials, and was looking to pick up some In-N-Out to accompany such a joyous occasion where Scully and Mulder would return like old friends I haven’t seen in a while, and, like many of my actual old friends, we would be hunting down aliens and supernatural beings in the middle of the woods, abandoned mineshafts, mental hospitals, cemeteries, open fields, farms, etc.

The anticipation is killing me at this point, but thankfully “Arrow” proves to be quite entertaining. Eventually, moments after 8pm “Arrow” ends and the channel switches from our shared DVR to real-time TV on FOX, only to discover that the hour-long “The X Files” was still on! “My God! No! What did I do wrong to deserve this?! Cripple my mother?! Don’t make me miss this!” I hit record immediately and switched on my DVR’d copy of “The X Files” and saw that FOX missed the hand-off from the NFC Championship game to the first major TV event of the year! This was all because they had to show Cam Newton and the Panthers doing a victory lap.

I fast-forwarded through a ceremony for a sport that I love (although I could care less about a blowout game where my team, the New York Giants, aren’t even playing) so I could see what damage had been done to my viewing. It was exactly a half hour after the scheduled start time of “The X Files” that FOX finally ran the show, when in reality they could’ve told viewers to switch their attention to FOX Sports… This was, after all, an award ceremony and awards are for children, while “The X Files” is for adults (well, people 14 or older).

Sorry to rant, but I figured I would share My Struggle, as I’m sure many other fans who may be reading experienced the same thing. To start things off, let me say I’m not trying to play the Woe Is Me card when I say “My Struggle”, as that is the name of the episode. It’s a good start, albeit a little clunky one, but it’s fun to see where our characters are nowadays...

Scully is working as a surgeon trying to help sick children, specifically ones who are born without ears, and Mulder is a recluse living off the grid as much as he can (he still has the internet, though, because how else do you keep up on conspiracies these days?). Mulder and Scully are reunited when Joel McHale’s character, a right-wing conspiracy nut with a YouTube-based FOX News-type of conspiracy show named Tad O’Malley, reintroduces our heroes to a young woman who has been abducted a lot (they apparently helped her as a child).

Things take off from there, and before the episode is even over, Mulder’s paranoia is back in full bat crap (guano) crazy swing as he begins to believe in the “alien conspiracy”. I will admit, my DVR ended up leaving out about 10 minutes due to Cam Newton (we got it FOX, he’s good but you know who’s better? Everyone involved in “The X Files”!), so I’m a little hazy if the “alien conspiracy” is the fact that aliens exist or that they’re violent. Either way, by the time the episode is over, it’s clear that (surprise!) the government is behind some dark and twisted plots.

I will say this about the episode, and despite the fact I enjoyed it, there was a feeling of being a little clustered. What’s unusual about that is that the clustering gave me a feeling that the show is actually on the right track. I know… crazy, right? Usually it’s the opposite, but hear me out. It seems like they wanted to pose to you the main theme for this six-part series that creator Chris Carter has said will be bookended, which means this will ditch the normal “monster-of-the-week” formula the show was built on, therefore being an A to B to C story. The first episode succeeds in getting the main information to you right out of the gate, which will ensure more thrills for the rest of the way. They won’t have to focus on so many details and setups when everything is already set up, then you can just have some smooth reveals.

We here in America are people who speed through red lights so we can wait in a line. We need to know what’s next, so, naturally, the burning question that is on everybody’s mind right now is, what will come of this series when it’s done? Will the show be back on for a while? Come back every now and then with a miniseries? Or is a third movie in the works? Nobody knows for sure, but what I do know is that the next episode will be on tonight at 8PM. Following that, all new episodes of “The X Files” will air on Mondays at 8PM with the miniseries wrapping up on February 22. Tune in! Seriously, aliens can’t abduct you if you’re snug in your house, they can only get you in cars stuck in the middle of a long, dimly-lit highway.