"The Walking Dead" Turns 100: Most Memorable & Shocking Moments From Each Season! 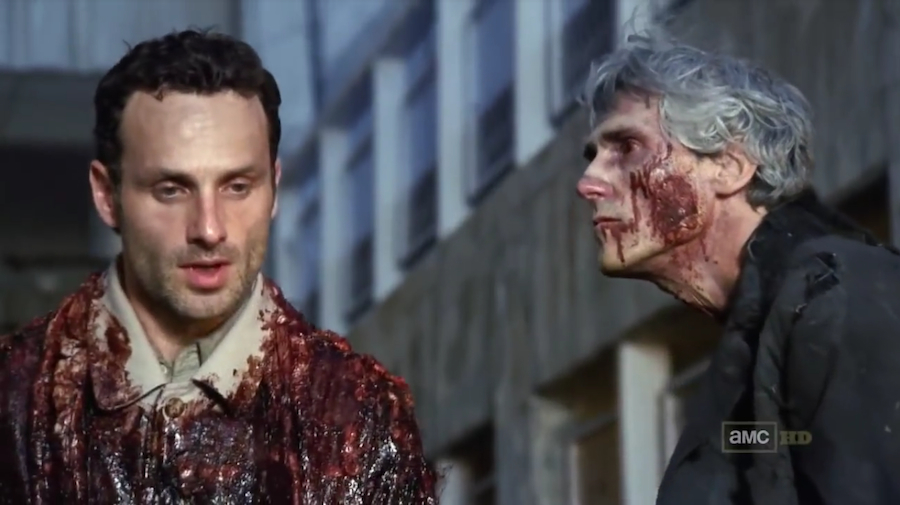 After a long hiatus, "The Walking Dead" returns this Sunday, October 22, and fans will be ushered back into the zombie universe with a war that we've been patiently waiting for!

Not only that, but the Season 8 premiere also marks the show's 100th episode! AMC is currently airing a "The Walking Dead" marathon so that you can relive all previous 99 episodes before the premiere 100th episode!

So in celebration =of TWD's 100th episode, I decided to look back at series and pick out a memorable moment in each of the past seasons that I thought gave a significant meaning and/or flipped the series on its head, giving the audience something new and fresh. (This was so difficult narrowing down to one moment for every season, because I could easily do a Top 5 moments for each season so please don't hate me if you have a different moment in mind for a season -- IT WAS SO HARD!)

Season 1: Do You Have The Guts?

This is the moment that sticks out for me in Season 1 because it marks on of the goriest and grossest moments on cable network TV. TWD pushes the envelope, showing audiences that they will be taking it to a whole new level. It also tells us a lot of the new rules of the zombie universe and how you can get through the zombie apocalypse.

Season 2 begins and is propelled by the search for Sophia, Carol's daughter, who gets lost in the woods. Rick and the group find and stay at a farm with a family who seems to believe that the zombies are sick and can be saved. They find out that they are hiding walkers in the barn, and Rick and the group let them out and take them out. The memorable moment is the last zombie that walks out -- a decaying Sophia, and the search for her ends. This signifies that the show will no longer be relying on hope and that you really shouldn't get attached to anyone. Even kids aren't safe!

In the beginning of Season 3, Rick and the group come across a prison that they believe can be their new stronghold. They go on to explore the prison and Hershel gets bitten by a zombie in the calf. With quick thinking, Rick decides to cut off Hershel's leg to save him. This yet again pushes the boundary of gore but also introduces an idea that you need not be complete in body parts to continue to fight in the zombie apocalypse, while the series at that point preserved the moral compass/guide that we see in Hershel.

Season 4: "Look at the Flowers"

One of the more heart-wrenching and non-zombie-related horror moments is when Carol makes a difficult but necessary decision. Carol and Tyreese are caring for Judith and two young sisters, Lizzie and Mika. LIzzie seems to have some kind of mental eccentricity where she cannot comprehend that zombies are dead and will kill her. The problem comes to light when she kills her sister, explaining that she will come back to life and that she planned to do the same to baby Judith. Carol realizes and does kill Lizzie because her mind makes her a danger to everyone. This shows the complexity of the apocalypse and how zombies aren't the only dangers, plus it marks a major turning point for Carol.

This season slowly leads to the reunion of Rick and Morgan, and at the end of the season they do so at probably the worst moment. Rick is explaining to Alexandria that he is only trying to save them, and Pete, Rick's nemisis in the town, accidentally kills Reg, the husband of Deanna (the leader of Alexandria), and she then gives Rick permission to kill Pete. He does so as a reformed and pacifist Morgan comes to see Rick and his ruthlessness. This gives a insight into Morgan's character and the journey he is about to endure.

Alexandria is overrun by zombies, and amongst the bustle of the escape, Ron attempts to kill Rick in retaliation but instead shoots Carl in the eye and the season leaves us worrying for Carl. He does survive and is tougher than ever. This pretty much makes Carl darn near unkillable in TWD.

Season 6 ends on a cliffhanger where Negan is ready to let Lucille, his barb-wired bat, beat someone to death, and she has her sights set on everyone. Although the comic may have let the cat out of the bag before Season 7, we now know that Abraham was the unfortunate receiver, and due to an outburst from Daryl, Glenn was a second fatality, just like in the comics. Glenn has been a character from the very beginning, and his death got everyone SHOOK! My mom even proclaimed that she is done watching the show because of Glenn's death. Spoiler: She's still watching. His death signifies the cruelty of Negan and that this is the beginning of a war that, from the looks of it, will devastate many fans of the show.

WARNING: If you haven't already seen Glenn's death, it is very gory and gruesome. Viewer discretion is advised.

Those were just a FEW of the memorable moments from each season, and I know everyone has their own favorites. It killed me to have to pick just one from every season but it was so great looking back on the past 99 episodes! I can't wait for Season 8 and what TWD has in store for us for the 100th episode!