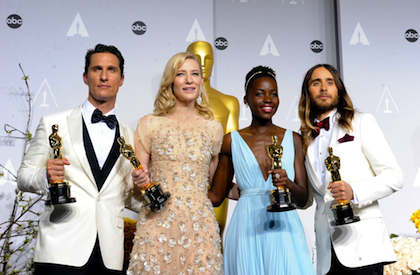 Let’s face it, you guys, last night’s Oscars were a little… weird. From the constant teleprompter slip-ups and missed cues to “Adele Dazeem” and J.Law going all Joe Pesci-from-Goodfellas on someone in the front row, it seemed like there was something in the water… That water being rain. Yes, you guys, rain does something to people in L.A. I’m not joking, it’s an actual phenomenon. It felt like everyone, from the presenters down to the cameramen, were water-logged or something, making for an unusually long and low-energy evening. No wonder Ellen ordered pizza for everyone!

A slice of cheese and pepperoni aside, there was a saving grace. A few of them actually… THE WINNERS. Honestly, I can’t recall an Academy Awards ceremony in recent years that had more powerful, moving acceptance speeches. It all started rather auspiciously with the first award of the night, Best Supporting Actor, and winner Jared Leto taking the stage and the opportunity to pay tribute to his mother (whom he brought with him to the show) and dedicate his Oscar to all those who struggle and have struggled with (and lost) HIV/AIDS. Jared set the bar high, and his fellow victors would follow suit quite aptly.

There was Best Supporting Actress winner Lupita Nyong’o, who was self-aware enough to realize the somewhat grotesque irony of being a free and independent (and wealthy) woman winning a shiny gold statue for pretending to be a person who had nothing but her pride. She capped off her acceptance with a wonderful sentiment that can apply to me, you, her, and even Pastey: “No matter where you come from, your dreams are valid.” WORD.

Then came Best Actress Cate Blanchett, who took the opportunity to squash the notion that women-driven films are a “niche” and a box office risk, when, in fact, they are quite successful and make money, thankyouverymuch. “The world is round, people!” she declared, and every woman in the building and watching at home duly whooped it up.

By the time Matthew McConaughey made his way to the stage to accept his Best Actor Oscar, we all collectively wondered what he would come up with this time – having already won no less than 12 other awards for his performance in Dallas Buyers Club, surely he was running out of stuff to say! Well, clearly, he saved the best for last and gave a heartfelt speech that was simple and yet profound – the idea that the only hero whom we should be looking up to is the best version of our own selves. YES! Stop comparing your journey to someone else’s, because no two paths are alike; concentrate on being the best YOU! Thank you, Matt!

The final gesture of the evening was perhaps the one that said it best – director Steve McQueen literally jumping for joy on stage after his film 12 Years a Slave was named Best Picture of the year. I mean, who among us would not react the exact same way if we were in that position??

Oh, and let’s not forget Kristen Anderson-Lopez and Robert Lopez, the winners of Best Original Song (“Let It Go” from Frozen), who read their entire speech in rhyme! How perfect was that?

So, for every one of Ellen’s zingers at Liza, there were at least 3 epic selfies that broke Twitter. See, we hear at Young Hollywood like to see the silver lining… which eventually did emerge outside at about 2:45pm. The magic of Hollywood, folks!!!